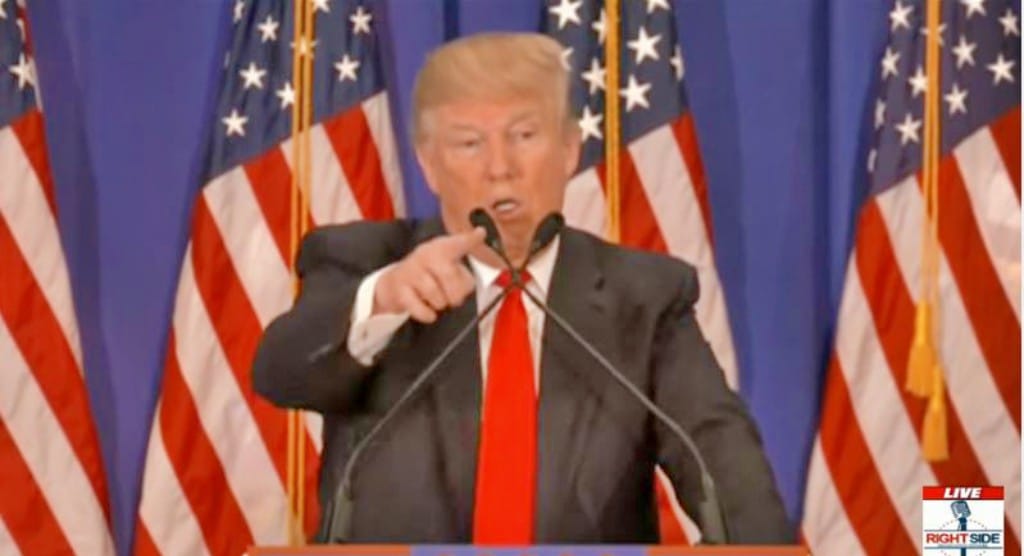 Donald Trump just finished his first press conference of 2017, and wow! Where to start? If you didn’t get the pleasure of watching it live, here is a short re-cap of the most dramatic moment in the press conference.

Last night Buzzfeed and CNN published unsubstantiated allegations that Russia has compromising personal and financial information on Donald Trump that could be used to blackmail him. Today, Donald Trump addressed those allegations and called out CNN and Buzzfeed live on T.V., for publishing information that was leaked from an intelligence briefing that both he and Obama were given last week.

For your viewing pleasure, a clip is posted below. You’re going to want to watch this.

Mediaiate reports: During President-elect Donald Trump’s press conference today, Trump took aim at “fake news” regarding the release of an unverified dossier by Buzzfeed, calling them a “failing piece of garbage.” Following that, he ended up getting into an argument with a CNN reporter, who he also called out during the presser over their report on a two-page synopsis they claim was presented to Trump.

With Trump looking to call on other reporters, Jim Acosta yelled out, “Since you are attacking us, can you give us a question?”

“Not you,” Trump said. “Your organization is terrible!”

Acosta pressed on, “You are attacking our news organization, can you give us a chance to ask a question, sir?” Trump countered by telling him “don’t be rude.”

All I can say is, it’s about time that news networks liken Buzzfeed and CNN know America isn’t going to listen to them spreading false information in order to promote their liberal agendas any longer.

I don’t know about you, but if this is a sign of what’s to come from future Donald Trump press conferences, I know I will be making sure to watch them live. It’s about time that someone stood up to the liberal media and fake news networks. And it looks like our future president is going to be the one to do just that.