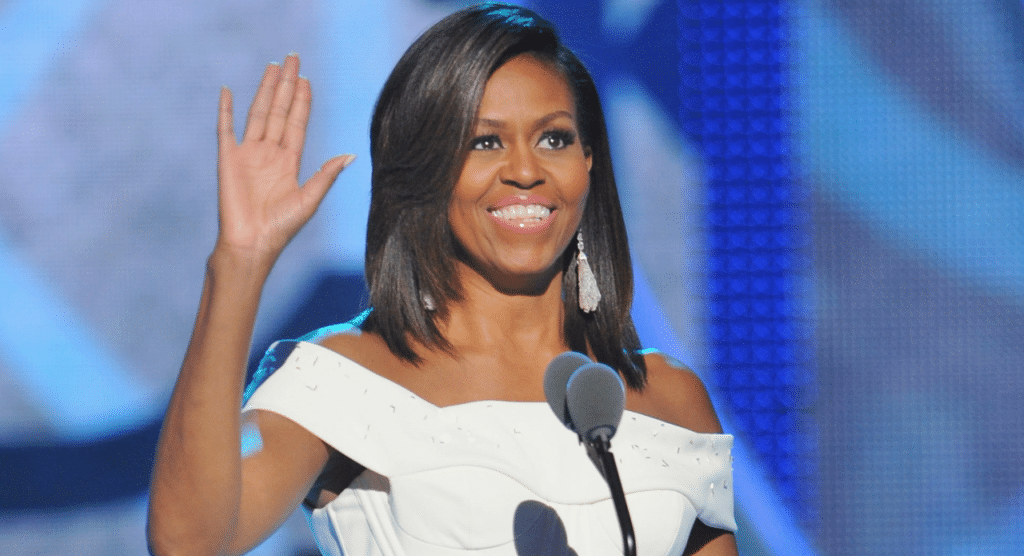 Michelle Obama whined and complained like a crybaby on Friday, and the mainstream media tripped over themselves in lapdog salivation.

If you missed it, there’s transcripts of her speech online. Have some nausea medication ready.

Michelle Obama’s speech, like nearly every time a Democrat opens his mouth, proves that liberals don’t understand basic logic, or American values. For while Trump is busy saving American jobs, prosecuting lawbreakers, and shielding America from the threat of terrorism, Michelle was busy praising those very threats – and doing so openly.

It’s no wonder Donald was elected in a landslide. The awesome news? This is her farewell. That’s right folks. This is Michelle saying goodbye!

Her speech started with illegals. “Do not ever let anyone make you feel like you don’t matter, or like you don’t have a place in our American story — because you do. Know that this country belongs to you, to all of you. From every background and walk of life. If you or your parents are immigrants, know that you are part of a proud American tradition . . . that has made us the greatest country on Earth.”

Michelle didn’t add the key word – “legal” – that would make her statements true. And Obama’s coddling and protection of illegal immigrants over his eight-year failure makes her meaning obvious – if you’re coming here illegally, and breaking our laws, the Democrats are ready to embrace you.

No surprise there. It’s not like the Democratic Party isn’t filled with felons already.

It got worse: in light of the increased threat of Islamic terrorism, Michelle decided to praise Islam’s ‘contributions’ to this country, in what could only be an effort to hide her husband’s failure to protect American citizens. “Whether you are Muslim, Christian, Jewish, Hindu, Sikh…I want our young people to continue to learn and practice those values with pride.” Again, “practice those values with pride.”

Yes, by all means, continue to practice those peaceful and tolerant Islamic values. The victims of Ft. Hood, Little Rock, Chattanooga, Boston, and Orlando enthusiastically agree. Or, at least, they would, were they not dead from radical Islamic terror.

Thank God it was a farewell speech.