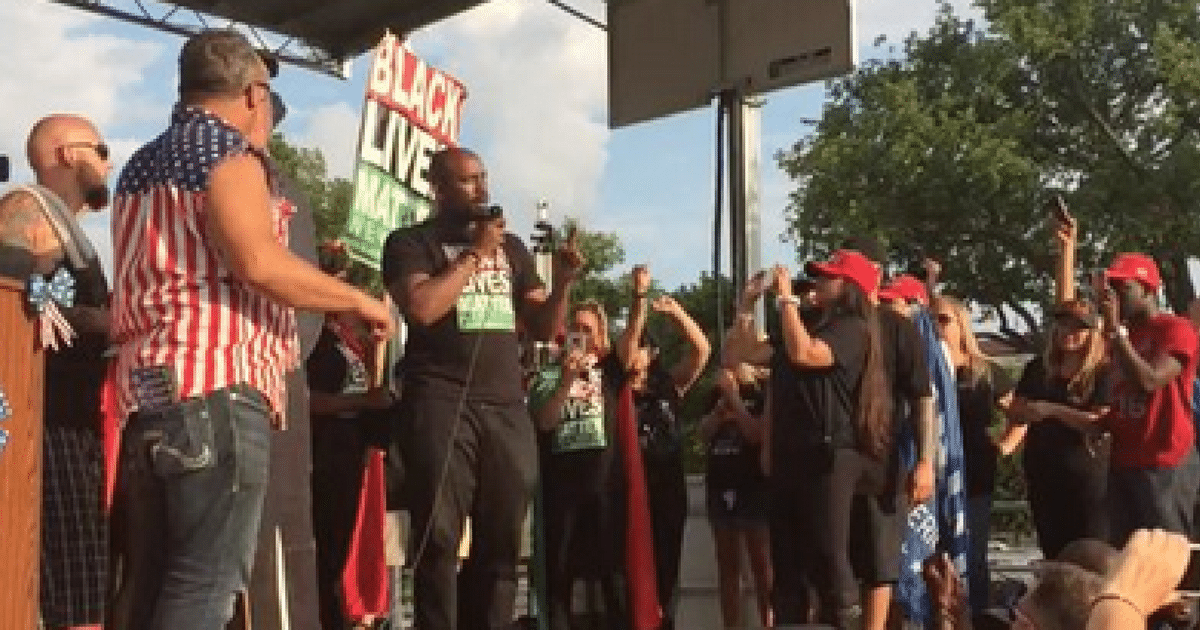 The basic pattern is this: conservatives rally to protest, a big group of counter-protesters shows up, and everyone starts fighting.

It’s primo ammunition for the liberal media, and they simply rejoice any time it happens.

So you’d expect that it would have happened this past week, during one of the largest conservative rallies in recent months. Especially when Black Lives Matter activists showed up to disrupt everything.

What liberal would have thought that BLM would be given a chance to speak by a conservative?

“The Mother of all Rallies” in Washington, D.C. on Monday brought out a huge group of President Donald Trump supporters.

The rally also had some protesters from the Black Lives Matter group show up. All this seemed completely predictable. However, something truly unexpected occurred — and it was remarkable.

People gather on the National Mall in DC to attend a rally in support of @POTUS called 'The Mother of All Rallies." https://t.co/MUyUWryCmM pic.twitter.com/temNtvg9ZZ

You can probably guess how it started – conservatives are out supporting Trump, the words gets out on the liberal Twittersphere, and suddenly the place is swarming with Leftist activists. Or Antifa.

Trump Mother of All Rallies getting set up today #MOAR pic.twitter.com/oInFAgUoy0

True to form, that happened. But it didn’t end badly. Not even close.

Because the Mother of All Rallies organizing head, one Mr. Tommy Gunn, decided to demonstrate what free speech was all about. And he invited the head of the BLM rally to speak a few words to the crowd – uninterrupted, without debate, and solely to share the BLM message.

To say ‘it worked like a charm’ is something of an understatement.

Gunn introduced his opponent onstage. “So you guys know that the ‘Mother of All Rallies’ was to end the political violence. It’s about freedom of speech. It’s about celebration. So what we’re going to do is something you’re not used to, and we’re going to give you two minutes of our platform to put your message out.”

Why BLM activists got on stage with Trump supporters at the Mother of All Rallies in DC – Mic https://t.co/xTQ2OL1LQb pic.twitter.com/J5URiJvjFH

The impromptu speech was given by Hank Newsome, a BLM organizer. And it went about as well as could be expected at first – some boos, some heckles, some shaking of heads.

And it’s a sure bet that most in the crowd didn’t agree with Newsome’s message.

A few days ago there was a rally in Washington DC. The Mother of All Rallies, billed as a pro-Trump… https://t.co/G90L7RXgoH

And, of course, the simple fact that no violence erupted in a rally that was being infiltrated by a group of liberal activists.

All because of one man’s commitment to Free Speech.

These Black Lives Matter activists were invited on stage at a pro-Trump rally – and every American needs to hear what they said pic.twitter.com/m69yvgiQtw