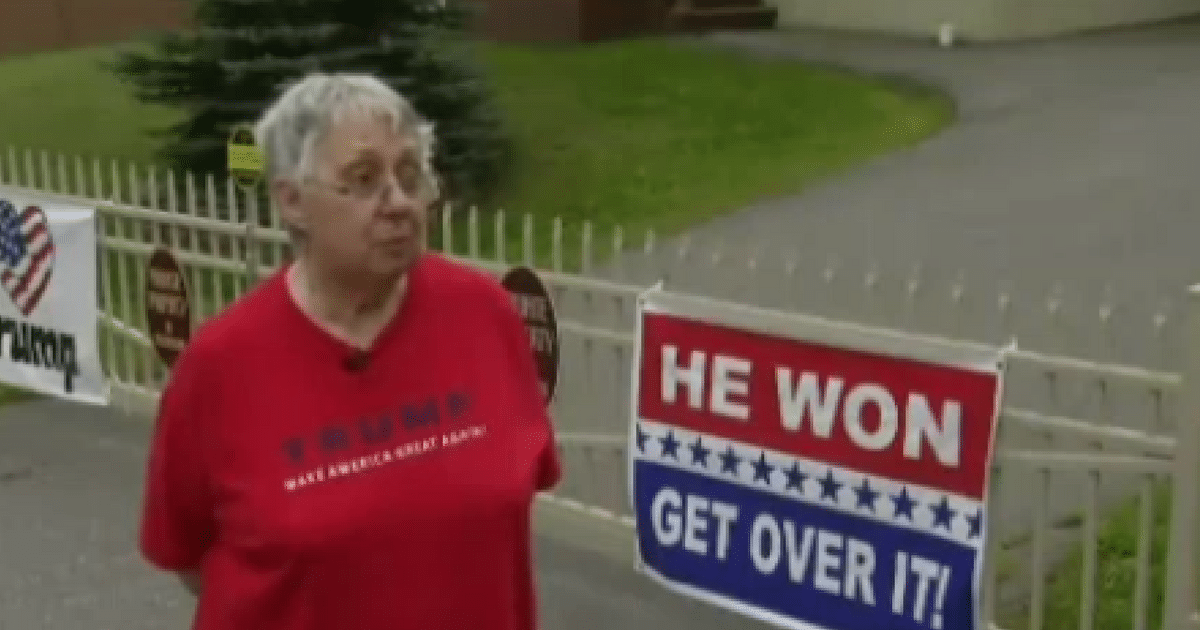 It’s a pattern that goes all the way to the top. Lost the election to Trump, did you? Well, maybe you can complain about it in a new book, and blame everything on Bernie.

Can’t find a job, keep a job, or pay your rent? Blame it on everyone else. Don’t like Christmas? Force everyone else to go without Christmas Trees or Nativity Scenes in public places.

Like I said, it’s a pattern. And it’s one that was on display in a small Maine town on Tuesday, where an elderly woman was given a choice: remove your pro-Trump signs, or go to jail.

What is surprising, though, is this: she chose jail.

A 75-year-old woman said she would prefer to find herself behind bars than take down her signs supporting President Donald Trump.

Code enfrcmt officer says signs are too big and there is one too many. Homeowner Susan Reitman calls it Free Speech. pic.twitter.com/zNNBfel76z

After authorities demanded that Rockland, Maine, resident Susan Reitman take down the signs in front of her property, she refused and said she’d rather go to jail than get rid of them.

Reitman refused to compromise her pride in the nation’s president, made evident by signs that read, “I love Trump” and “He Won, Get over it.”

“I was shocked. This is my freedom of speech. People have a right to voice their opinion.”

Well, not all people have that right, Ms. Reitman. Just liberals.

Susan Reitman believes city is trying to violate her Right to Free Speech. She's refusing to take them down. @WGME pic.twitter.com/hBWwrdv9FW

Now, you’re probably wondering how in the world libs can just demand that Reitman take her signs down. Like in most petty liberal prosecutions, it involves misusing a law that no one really cares about.

The order to remove the signs came after a Rockland resident complained that Reitman’s signs were too large. The city ordinance says signs can’t be bigger than 2 square feet: Reitman’s signs are allegedly 3 feet by 2 feet.

Yes, of course. The sign is one foot too large. And that is obviously the reason someone wants the signs removed…not because of what they say. Because of an extra foot of cardboard, clearly.

Sadly for Reitman, though, the city has to enforce the code, no matter what the authorities actually think about the situation. She must take down the signs, or face fines.

“If I have to sit in jail for the rest of eternity, that’s my choice. I guess I’m being stubborn … but I’m not going to back down from what I believe.”

.@TheKuhnerReport Jeff! I support Susan Reitman in Rockland,ME! My town is full of these #socialist signs! pic.twitter.com/xTStpn9kRD