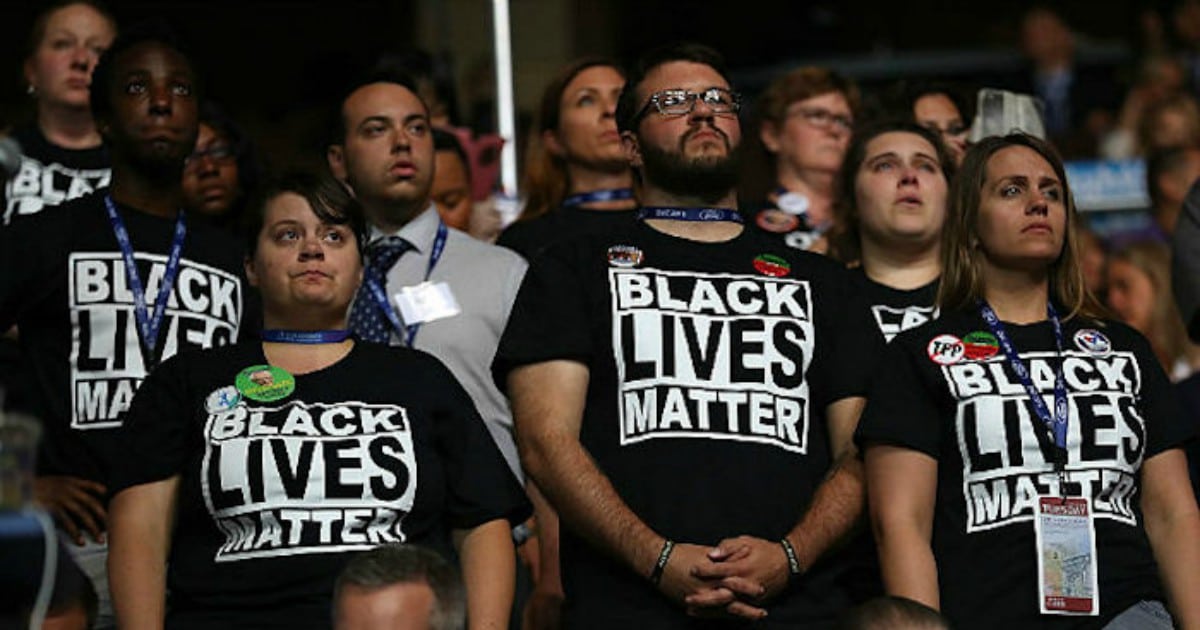 Is there anything more stupid than white people supporting radical black hate?

In generations past, millions of white Americans rallied behind Civil Rights leaders like Martin Luther King, to support their vision of shared equality for all Americans.

This was important, because without the support of their white neighbors, the Civil Rights movement might not have succeeded.

Yet today “civil rights” leaders within Black Lives Matter do not care about equality. They are only interested in manipulating our legal system in the hopes of attacking and tearing down white people.

[playbuzz-item url=”//www.playbuzz.com/proudcons10/is-saying-all-lives-matter-racist”]
Instead of fighting to make sure every American — regardless of their race — is treated right, this hate group celebrates the death of cops and frequently maligns white people on social media (something that sites like Twitter and Facebook refuse to label as hate speech).

So it makes sense that decent Americans — both black and white — would shy away from this radical group.

Yet still there are white people — wanting to virtue signal their superiority — who rally behind BLM and its toxic message of destruction.

Yet time and again we see how little BLM thinks of white people and how, if they had their way, we’d all be treated terribly.

All Hispanic and. Whites who support #BlacklivesMatter @BLMPhilly says you are not welcome at meetings and you can't attend.

Look very closely at this photo of MLK marching for black rights. As you can see white people are with him. So why is @BLMPhilly saying no? pic.twitter.com/e29ddQCuHn

A branch of the Black Lives Matter movement in Philadelphia has banned white people from an upcoming meeting, in what the organizers say will be a “black only space.”

The meeting, which takes place April 15th, invites people to “meet, strategize and organize” events and is apparently family-friendly, with families encouraged to bring their children along as well.

One Twitter user suggested that Martin Luther King Jr. would never have supported such a policy, and the group simply said that “he made that choice and we have made ours.”

The Philadelphian Black Lives Matter branch is not the first to try a policy of discrimination based on skin color.

Ah yes. Nothing says racial harmony like discrimination against 77% of the country.

BLM Philly has sided with Malcolm X, the radical Civil Rights leader who called for the death of those who opposed him (and who was also the founder of the Nation of Islam).

They claim they still want white people to support their cause (i.e.: give them lots of money), but they’re not allowed to attend meetings, interact with black members, or generally have any kind of leadership role in the group.

Black Lives Matter believes all white people should be held responsible for sins of the past.

So they want us to feel bad about how evil we are (based on our skin color, not actions) and be forced to transfer our wealth into their pockets. But God forbid we take an active role in shaping their movement and helping their cause.

Because who would want white and black people working together?

The sad reality is that the peaceful policies of MLK have been ignored by modern black activists, who are largely fueled by hate and resentment.

They will never be able to secure lasting equality for black Americans, if they continue to reject their white neighbors and show hostility to much of America.

Yet this is a growing trend among these groups and many young people online echo this kind of sentiment.

Does this spell the doom of legitimate Civil Rights efforts? It’s too soon to tell.