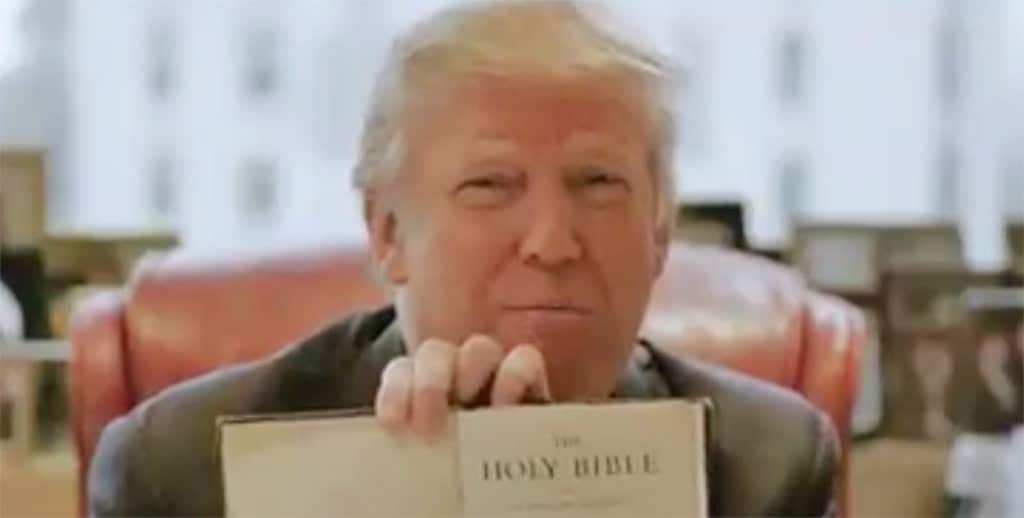 Despite secular humanists’ assertion of separation between church and state, faith will always be a major part of our culture and society.

Even the Muslims they protect believe that.

So as with every election, presidential candidates try to connect with the religious leanings of their supporters in order to secure their votes.

They often appear at prayer meetings and churches, get the endorsement of notable pastors and reverends, and make comments about God and faith in their speeches.

Even with his bold and brash persona, Donald Trump has been open about his Christian background and faith. During the campaign he went out of his way to connect with Evangelical voters, showing the Bible his mother gave him after he graduated Sunday school as a child.

I want to thank evangelical Christians for the warm embrace I've received on the campaign trail. I will not let you down! #MakeAmericaGreatAgain

But was that faith genuine? Do we have a President that truly believes in God and seeks his guidance?

Recently Trump was criticized by Pope Francis, who claimed that because of Trump’s strong stance on immigration, he couldn’t possibly be a Christian. This, coming from a highly political religious leader, who neither represents the faith of the president, nor hasn’t even met with him personally.

President Trump had his own words to say about this.

Trump did make a comment this week about his faith.

“I would say that the office is so powerful that you need God even more because your decisions are no longer ‘gee, I’m going to build a building in New York,’ or ‘I’m going to do this.’ These are questions of massive life and death, even with regard to healthcare.  You know we’re working very hard on healthcare. But there, you’re talking about life and death and you’re talking about better lives. People living better because they have better health care at a lower price, which we’re working very hard on.

“So yes, you realize these decisions are all so important. There’s almost not a decision that you make when you’re sitting in this position that isn’t a really life-altering position. So God comes in even more so.”

The administration is also making some major changes in their press conferences and in one-on-one interviews, allowing media outlets like the Christian Broadcasting Network in addition to traditional secular networks. Donald Trump understands that people of faith, like the evangelical Christians who gave him 85% of their votes, have different perspectives than a secular audience.

This is true of the left, who while they pander to predominately religious black Americans, push forward policies and agendas that often violate the morality and virtues of the Bible and the Christian faith.

We should remember that in 2008, Barack Obama embraced his Christian background. While his administration did very little to uphold Christianity in America, he was able to convince voters that he was a man of deep religious roots.

Now we have a president that will put that faith in what he does. He will not simply claim to believe in God, but allow his belief to inspire and guide him. That’s the kind of leadership we’ve always needed in the White House.