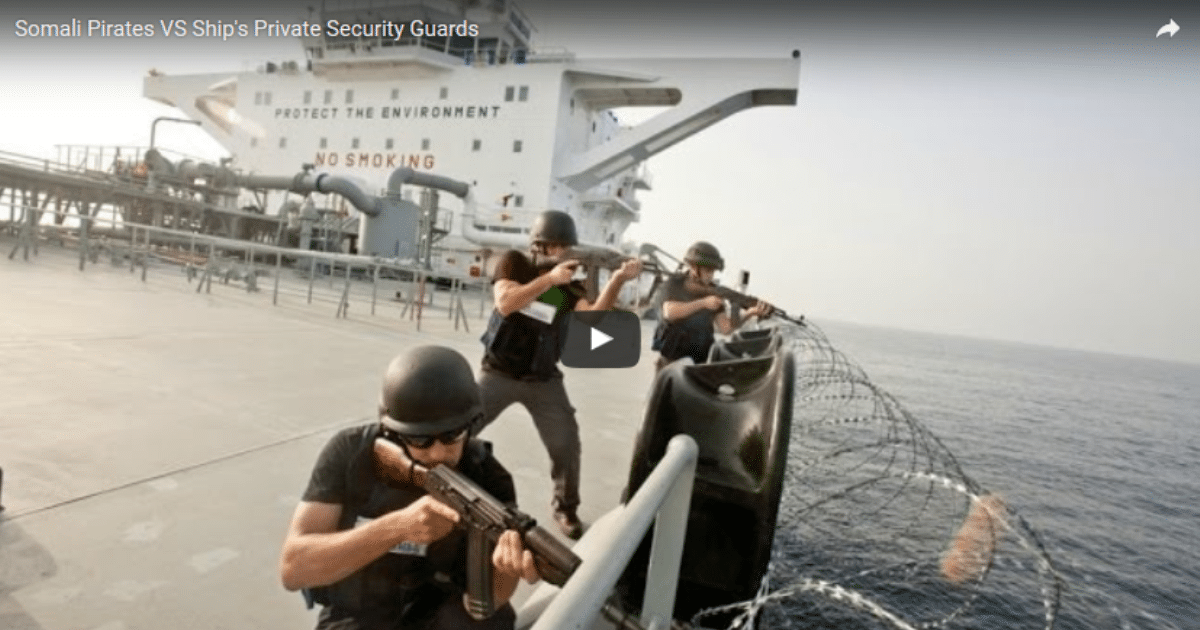 Work on the high seas is dangerous.

When there’s not storms or other natural disasters to worry about, there are the pirates.

Even today sailors must face the threat of pirates, many of whom are from Somalia.

But this one ship was certainly prepared. And we have the footage to prove it.

The international community has responded fiercely to the Somali piracy threat, but merchant ships have still wisely chosen to employ private security. The freighter ship “MV Avocet”, operated by New York-based Eagle Bulk Shipping Inc., employed the Trident Group to fight off any potential pirates, and clearly, it was needed.

Trident Group President Thomas Rothrauff said that the vessel had been attacked by pirates several times over the course of three days, and security was forced to engage the pirates in a fierce gunfight. The footage was leaked in April of 2012, with the incident itself taking place in December of 2011.

In the video, a skiff can be seen approaching the vessel. The guards first fire warning shots, which do nothing to dispel the pirates. So the guards open fire, with dozens of rounds raining down onto the pirates. They soon crash into the freighter, but it isn’t over: a second boat shows up. The guards then turn to open fire on the new boat, which is where the footage cuts off.

Although pirates might seem like something out of the past, they are a real and present threat.

Pirates attack vessels all over the world, threatening crews and robbing international businesses. Much of the goods we buy and sell are shipped across the ocean. They are prime targets for pirates.

But clearly these pirates were seriously outmatched. This merchant ship hired highly skilled—and armed—security to keep them safe.

The video is intense. The smaller skiffs hoped to quickly board the ship and take it over. They were not expecting gun fire that would put an end to their plans. The first skiff gets too close and everyone aboard is presumably shot dead.

The second skiff stays close, but appears to have moved away when the security forces spotted them.

Hiring this kind of security is expensive, but clearly, it works.