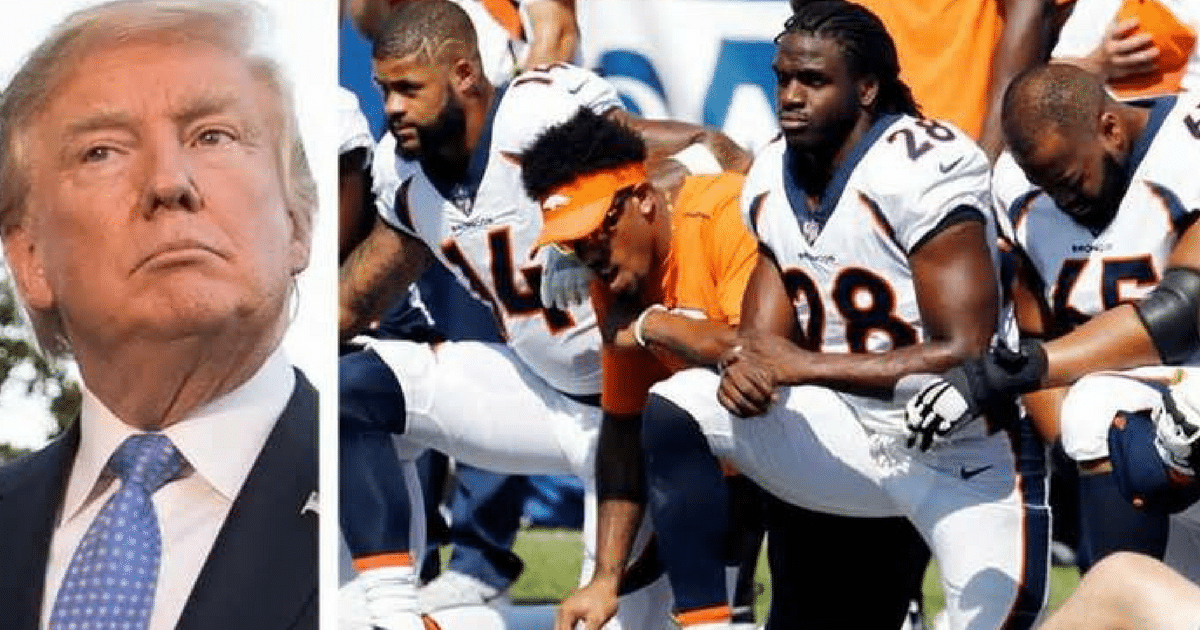 Recent weeks have shown a shocking trend sweep through professional sports. Highly-paid, famous, and entitled athletes are choosing to insult the American flag, by kneeling during the National Anthem.

They do this because they claim they are protesting “racism” in America, yet their very careers contradict their actions.

These men enjoy a kind of lifestyle few in this country could imagine. They get to play a game they love for a living, earning high pay. They appear in interviews, have legions of fans, and experience an opulent lifestyle. Yet despite all this, they insult the very country that allows them to live this way.

It started with one former NFL player and has spread like a cancer throughout the league. This last week has seen a sharp uptick in players who refuse to respect our flag. Now it has even spread to other sports, including Major League Baseball.

Through all this, Americans are fighting back. As more entitled and spoiled players protest our nation, viewers are switching off. Why waste time and money supporting a team that allows this kind of behavior? Where are the coaches and team owners with integrity, who will demand better behavior from their players?

At least one NFL owner stands with patriotic Americans and the President. Jerry Jones, owner of the Dallas Cowboys, has  vowed that none of his players will kneel during the anthem. That is, if they want to keep playing for his team! His announcement comes after remarks made by President Trump about the situation. Trump made his opinion very clear: any players that refuse to stand for our country should be fired.

Jones seems to be echoing the Commander in Chief’s response. Last weekend the entire Dallas Cowboys team locked arms. After kneeing before the anthem, they all stood up to show their solidarity and respect for our country, the flag, and its people.

Then they went on to crush the Cardinals 28-17.

Hmm, perhaps there is a correlation between standing for the country and the president and winning. The Cardinals also stood for the anthem, but their owner hasn’t backed Trump in any way.

Hopefully this act, by one of the biggest and most respected names in the NFL, will inspire more owners to get their act together.

Donald Trump said Wednesday that at least one NFL owner has assured him that his team will stand for the National Anthem before its NFL games.

‘Spoke to Jerry Jones of the Dallas Cowboys yesterday. Jerry is a winner who knows how to get things done. Players will stand for Country!’ the president tweeted.

Jones knelt along with head coach Jason Garrett and all their players in the middle of the field on Monday night in a show of unity before they all stood for the anthem before their 28-17 win over the Arizona Cardinals.

Jones, 74, in the past has criticized NFL players who kneel during the song itself. But taking a knee beforehand drew some booing from spectators. The Cardinals did not kneel but, like the Cowboys, all linked arms.

Other NFL team owners have supported their players who chose to kneel in protest of racism in America. Some owners explicitly criticized Donald Trump for his denunciation…

At a news conference in August, Jones said: ‘There’s no question in my mind. The national anthem is sacred. Our flag is sacred. And our team has demonstrated that…’

The Dallas Cowboys have been nicknamed ‘America’s Team’ since 1978.

It’s shocking to think that there are Americans so full of hate, that they refuse to respect our flag. We all know that our country faces significant challenges.

We are not perfect, but we are the greatest country in the world because of our freedoms and faith. Those things have helped us overcome problems in the past and will continue to do so.

To insult our heritage and history by kneeling is ignoring all the progress we’ve made to improve our nation. Especially by men who are treated better than most in our society.

It’s definitely the jobs of NFL coaches and owners to demand their players respect the flag. Football fans are some of the most patriotic in the country. They will not tolerate such behavior for long.

It’s only a matter of time before teams that disrespect our country lose all support.