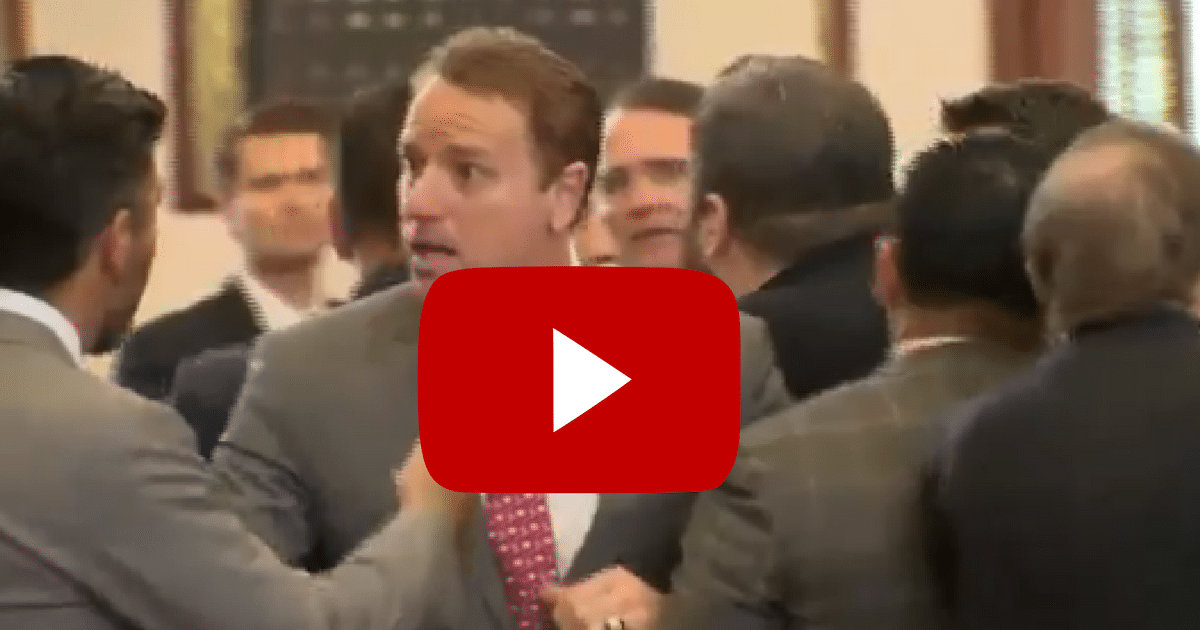 Democrats are losing it. Literally.

It’s clear that they no longer care about our laws, system, or democracy. They have shown recently that their corrupt policies are more important to them than the safety of American citizens.

Or the safety of their fellow lawmakers.

Just look at how democrats in Texas reacted when a republican lawmaker did the right thing and reported criminal aliens.

Matt Rinaldi, a Republican Texas state representative, claims Democratic colleagues of his threatened him with violence after he called ICE on illegal immigrants who were protesting in the state capitol Monday.

Rep. Rinaldi claimed in a Facebook post, “Today, Representative Poncho Nevarez threatened my life on the House floor after I called ICE on several illegal immigrants who held signs in the gallery which said ‘I am illegal and here to stay.’ “

Then Rinaldi claims another Democratic representative became violent towards him.

“When I told the Democrats I called ICE, Representative Ramon Romero physically assaulted me, and other Democrats were held back by colleagues.”

“During that time Poncho told me that he would ‘get me on the way to my car.’ He later approached me and reiterated that ‘I had to leave at some point, and he would get me…’”

Rinaldi addresses that in hist post, writing that, “I made it clear that if he attempted to, in his words, ‘get me,’ I would shoot him in self defense. I am currently under DPS protection. Several of my colleagues heard the threats made and witnessed Ramon assaulting me.”

So much for peaceful, law-abiding democrats. They have accused conservatives and Trump supports of brewing violence in our nation. Yet the only people becoming violent are liberals. Funny how that works.

We’ve seen liberals get increasingly violent in recent months. It seems like if democracy fails to get them what they want, they lash out. Like spoiled children, they refuse to suck up a loss.

Eight years of Obama have turned an entire party into sniveling, evil brats. They are even threatening lawmakers for doing their job.

This story will go a long way in showing the rest of the country that democrats are losers. Period. They do not deserve our support or votes. Anyone with sense must abandon the party immediately.

It’s clear liberals are not on our side.