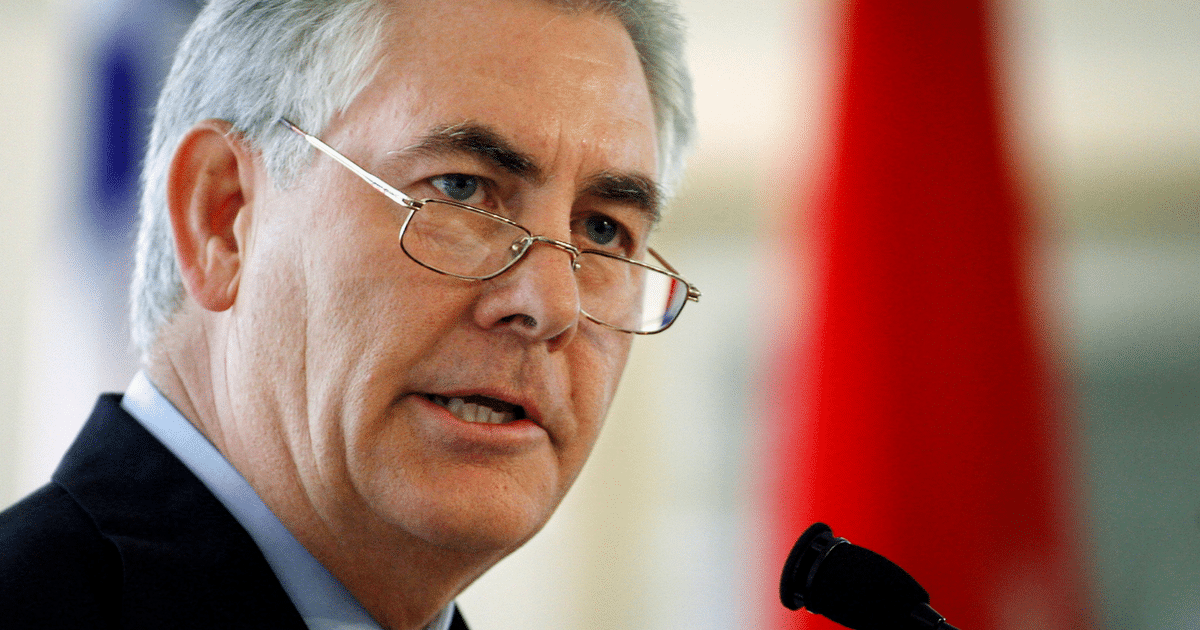 The descent of the mainstream press has been one of the most fascinating asides to watch since President Donald Trump was sworn into office.

Journalistic standards have been on the decline for some time, but they’ve completely gone out the window for some outlets entirely.

One can easily mistake the average news broadcast for a tabloid-style show, while click-obsessed publications pay little mind to actually sharing the facts.

It’s all about the narrative in their world, and they’ll pull out all the stops to advance it.

There have been a ton of examples to demonstrate that fact, and we had another one pop up on Wednesday.

The mainstream press was frothing at the mouth and tripping over itself to report that Secretary of State Rex Tillerson had allegedly referred to Trump with a derogatory term behind closed doors.

Absent in the reporting was a key part of the ‘story’: that it was alleged. As has often been the case in recent times, the mainstream press picked up a ball of hearsay and ran for daylight.

This tidbit was presented as an irrefutable stone cold fact. The same trick has been pulled dozens of times with nonsense stories about alleged Russian collusion in the election, and the press isn’t shy about going back to the well.

Using the Russia stories as an example, the press follows a simple formula each and every time. A so-called ‘bombshell’ makes the rounds, and it’s quickly spun as if it’s a statement of fact.

After the hysteria starts to level off slightly, a peek behind the curtain reveals that there’s nothing there. Again. The story that the press had been getting all hot and bothered about was based on the claims of an unnamed source and nothing else.

It’s unclear which part of this phenomenon is more confusing: the fact that the press can continue to do this with a straight face, or the fact that they actually expect people to continue purchasing the snake oil they’re peddling.

While yesterday served as yet another sad example that the press is more concerned with personal agendas than their actual jobs, there’s a small glimmer of hope that we can all take away from the events.

The jig is up, as the curtain continues to be pulled back on the games that the press plays. While the Secretary of State was forced to waste time on this nonsense, he drove that point home in no uncertain terms. During a spur of the moment press conference Wednesday morning, Secretary of State Rex Tillerson took a moment to address news he had used unkind rhetoric toward President Donald Trump.

“First, my commitment to the success of our president and our country is as strong as it was the day I accepted his offer to serve as secretary of state,” Tillerson said at the top of the press conference.

It’s truly disturbing to know that Tillerson even had to make this clear. By all trustworthy accounts, he’s an honorable man that’s committed to fulfilling the duties of his office.

Have there been some disagreements behind closed doors? Possibly, but we have a simple question on that: Is that really a bad thing?

That helps exceptional decisions to ultimately be made, and any leader that’s worth his salt will sing the same tune.

Beyond the ridiculous hearsay that the story revolved around, it also attempted to sow the seeds of dissension behind the scenes.

NBC News broke the story earlier Wednesday that Tillerson, after President Trump’s controversial July 20 speech to the Boy Scouts of America, had called the president a “moron.”

The comments were reportedly made at the Pentagon during a meeting with members of Trump’s national security team and various cabinet members.

Tillerson, fourth in line for the presidency, was “on the verge of resigning” over the comments.

Continuing after a brief rundown of the accomplishments and currents goings-on of the Trump administration, Tillerson addressed the NBC News report: “The vice president has never had to persuade me to remain as secretary of state because I have never considered leaving this post.”

That seems pretty cut and dry. Perhaps the crack reporters could’ve extended some effort to get some remarks from Tillerson before pushing the hearsay as fact.

They didn’t, so he had to take time out of his day to make things clear. He had some other things to clear up for members of the press as well, and it would be lovely to see the message sink in.

“I’m not going to deal with petty stuff like that. This is what I don’t understand about Washington. Again, I’m not from this place,” Tillerson said. “But the places I come from, we don’t deal with that kind of petty nonsense. And it is intended to do nothing but divide people.”

Quite simply, stories of this ilk are a complete and utter waste of time with a clear goal in mind: to portray the Trump administration in the worst light possible.

While it’s great that the press has found a way to entertain themselves and garner praise from those in the liberal echo chamber, their behavior is crass, divisive, and downright irresponsible.

Unfortunately, that’s not going to change anytime soon. As such, outlets that fail to shoot straight will continue to plunge into irrelevancy.

When the inevitable ‘Rise and Fall Of (fill in the blank)’ stories get written in the future, we would encourage those that write them to spend as much time as possible on the tortured relationship that the outlet in question had with the truth.

We’ll let the commander-in-chief himself have the last word on the latest non-story that the mainstream media worked itself into a lather over.

NBC news is #FakeNews and more dishonest than even CNN. They are a disgrace to good reporting. No wonder their news ratings are way down!