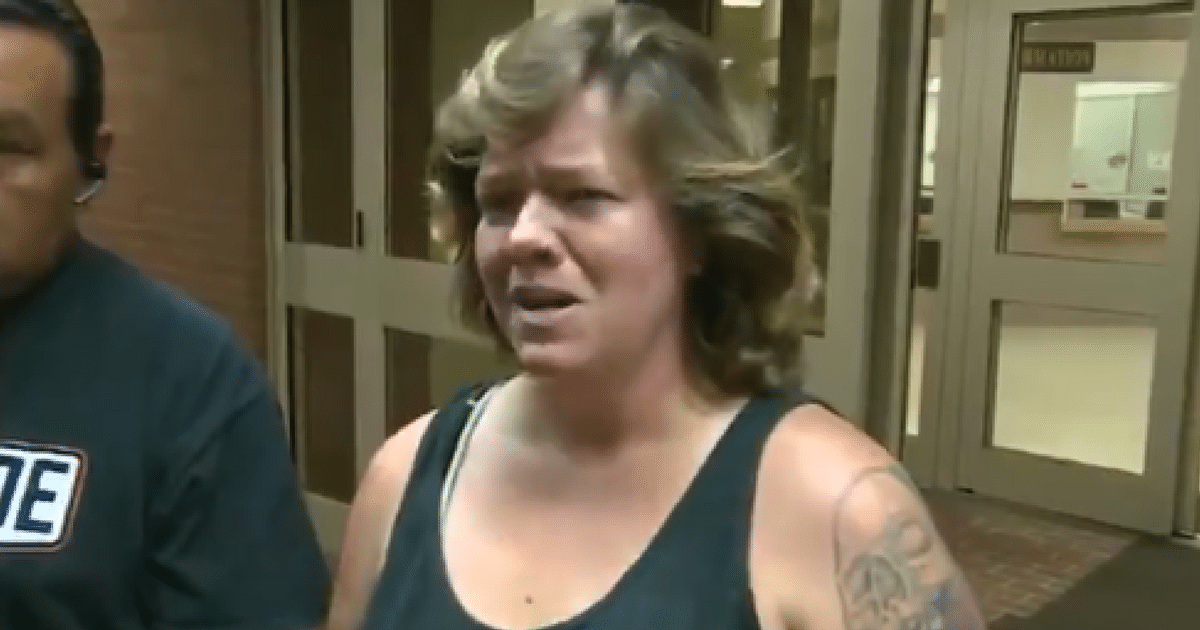 If you carry yourself in a crass manner with nary a thought to the world around you, there’s a good chance that you’re going to receive what can be best identified as wake-up calls a number of times during the course of your life.

Whether you choose to answer that call or not is a different story.

That scenario is playing out in very public fashion deep in the heart of Texas, but the woman at the center of it is showing no inclination of realizing that her way of approaching things is not the best course of action.

Pickup truck owner Karen Fonseca made headlines for the large sticker on the back of her vehicle. The sticker reads, “F**k Trump and f**k you for voting for him.”

Fort Bend County Sheriff Troy Nehls revealed he had received many calls complaining about the sticker. He said Fonseca could be charged with disorderly conduct, which extends to the use of profanity in a public space.

He clarified that he didn’t want to arrest her but hoped they could come to an agreement on using different words.

This little situation turned into what is known as a viral sensation. As such, it’s sparked a rather interesting conversation.

It looks like there’s plenty of folks out there that find absolutely nothing wrong with expressing yourself in vulgar fashion anywhere you feel like it.

We can include the ACLU in that category.

The threat of charging Fonseca saw the ACLU of Texas get involved, saying the sheriff can’t “prosecute speech”:

.@SheriffTNehls, you can't prosecute speech just because it has the word "f*ck" in it. (And the owner of the truck should feel free to contact @ACLUTx.) #ConstitutionalLaw101 #FreeSpeech pic.twitter.com/WPWUW5fFwo

Is the ACLU correct on the legal aspect of this? Perhaps, but as we know by now, there’s an alarming number of things that are open to interpretation in a court of law.

Regardless, let’s set that aside for a moment.

Does the ACLU really want to put the message out there that folks can express themselves as they see fit with nary a thought given to how their actions affect others?

It certainly appears that way.

In any event, Fonseca has received a dose of comeuppance, but it hasn’t led to a light bulb moment for her.

It turns out Fonseca was arrested, but not for the sticker. With all the attention she was receiving, the police discovered she had an outstanding felony warrant for fraud. The Fort Bend County Sheriff’s Office confirmed to Houston’s Fox 26 that Fonseca was booked into the county jail.

Owner of the now infamous "F-@realDonaldTrump Truck" speaks to us after bonding out of jail. She was arrested 1 day after refusing to take down F-Trump decal. Arrested on unrelated fraud warrant. She says this was simply retaliation from @FBCSO for the sticker #khou11 pic.twitter.com/FZpXDbWZ1K

You can be sure that the cool kids in the safe space crowd are viewing this woman as the latest incarnation of a ‘hero’ that they all look up to.

That’s equal parts disturbing and unsettling, and it really tells you all you need to know about the mindset of those that spew such effusive praise on those that act like neanderthals because they don’t care for the President of the United States.

Many moons ago, things such as class, dignity, and respect meant something.

Can we get back there? Please?