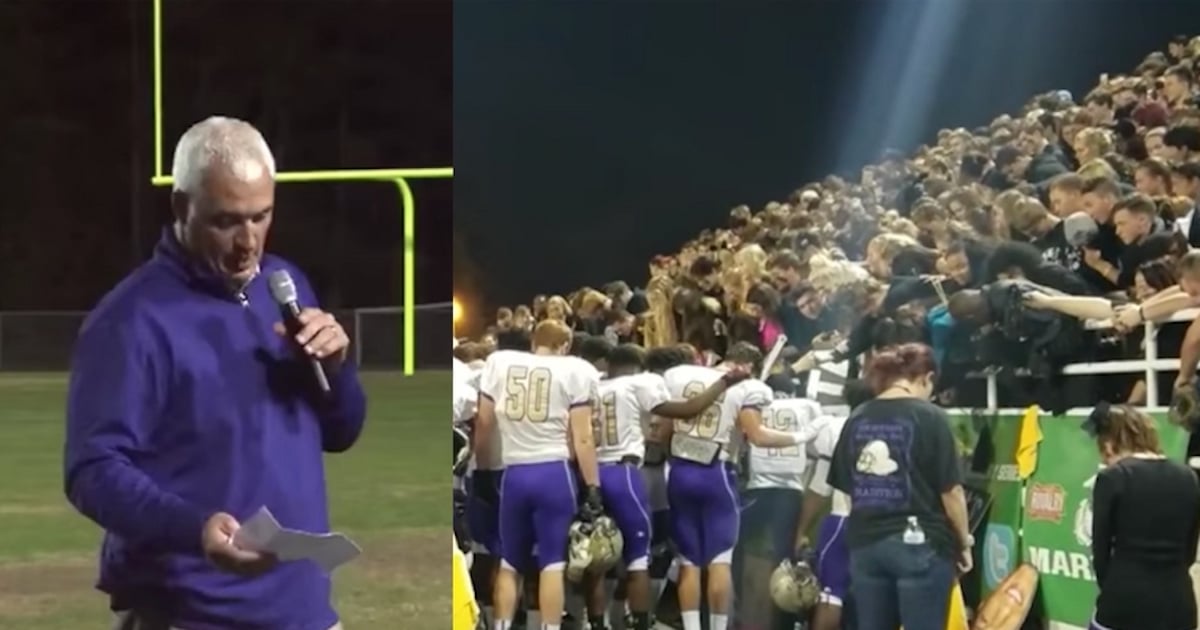 Any parent knows: you tell a teenager he can’t do something, he’ll turn around and do it immediately.

It’s as predictable as lunar cycles, or liberals trying to spend other people’s money.

The trick is, of course, to tell teenagers that they’re not allowed to do good and honorable things.

And then, with any luck, they’ll turn around and do good and honorable things in defiance of their parents.

Or, in this case, in defiance of big government, PC culture, and atheist lawyers.

All three of those groups banded together to stop a Georgia high school coach from praying on the football field before games.

It worked, and he stopped. Liberal insanity wins again.

Of course, they couldn’t stop the students. If a few of them wanted to pray on the field, no one could say a word.

It wasn’t a few, though.

It was four hundred of them.

“When the atheist group Freedom from Religion Foundation sent a letter to Georgia’s East Coweta High School warning them that coaches leading in prayer with student athletes was impermissible, they probably thought they had already won the battle.

That didn’t mean the players — or the fans — weren’t going to bow their heads.

When East Coweta took the field for a recent Friday night game, they had more than just the football players bowing.

“Instead of it being 100 players praying, it turned into 400 students praying,” coach John Small [said].

You can tell that liberals don’t have very many kids. They simply don’t understand how reverse psychology is supposed to work.

The kids, however, in addition to getting a lesson about faith and persecution, learned what happens when you give too much power to big government:

The people at the top get bored and start looking for other people to boss around.

Sad fact is, people of faith often look weaker. Although, as Friday night at East Coweta High proved, ‘looking weak’ and ‘being weak’ are not the same thing.

And while it might be easy to prey upon a coach, it’s nearly impossible for lib lawyers to attack an entire student body.

Especially not a body of defiant teenagers who have been told what they cannot do.

John Small, the East Coweta High School football coach who has been at the center of a controversy about school prayer, says the local superintendent and school board have been supportive of him and other coaches. https://t.co/Cv6XIF1DT7 pic.twitter.com/0yfUcph7Kl

Or, in this case, the poisonous PC culture of the left.