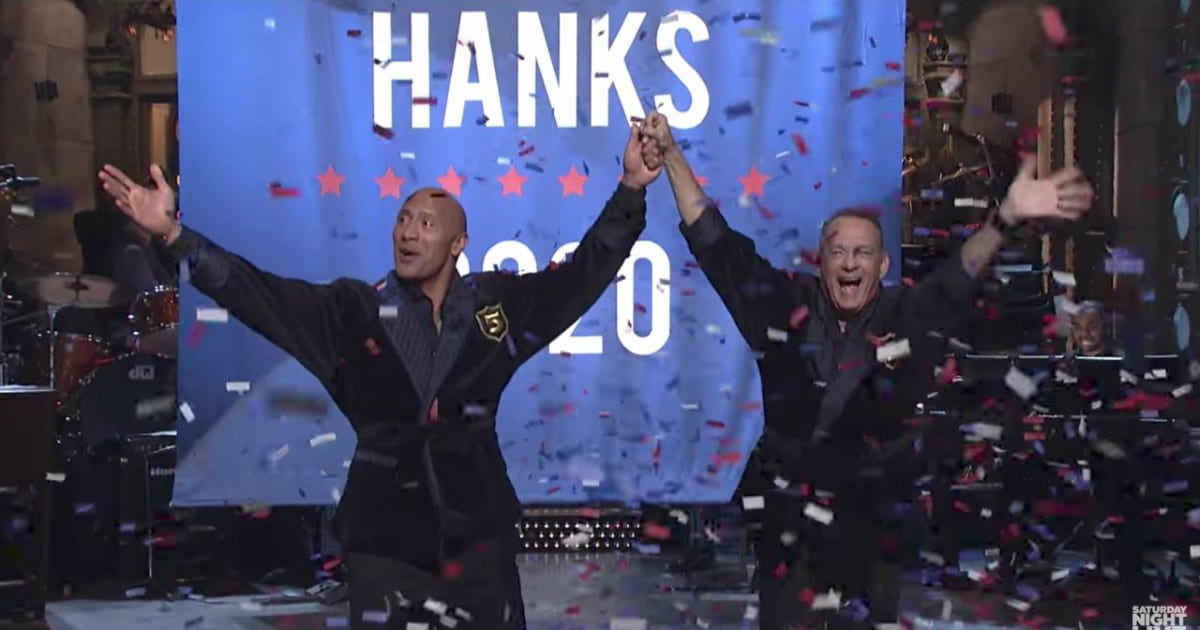 One thing has become painfully clear during Trump’s first few months: the Democrats have absolutely no one to challenge him in 2020.

A few names have been floated around – Oprah Winfrey was one – but they’re all celebrities. They may be likeable, but they don’t have business experience, or legal experience, or understand how to make a deal. There is literally no good Democratic candidate around, anywhere.

After all, if you’re looking at celebrities for your leaders, you’re probably out of options. But if you are out of options, why not go all-out and get the best terrible option you have?

Which, here, would be the most likeable celebrity you could find. Dwayne ‘The Rock’ Johnson is running for president.

And his VP? Tom Hanks. They announced it on live TV last Saturday.

(Just kidding – Johnson was joking. But it sounded real, yes?)

Dwayne “The Rock” Johnson announced his plans to run for president alongside running mate Tom Hanks during his Saturday Night Live monologue on Saturday, May 20.

Mind you, this didn’t come out of the blue – there’s been rumors about The Rock running for president for some time now. Twitter’s had something of a field day with the idea.

The Rock and Mark Zuckerberg are better bets for 2020 president than many politicians https://t.co/nyPRW0nZUx pic.twitter.com/LuaQYf1Yla

And Democrats? Well, they’re out of options already – may as well pick someone likeable this time. He’s got to at least get more votes than Hillary did.

Johnson, however, was clearly never interested in the idea. And he had a very good reason – he’s not qualified, and he completely gets that. Not all celebrities are idiots.

But that doesn’t mean he didn’t take the opportunity to play up his fake announcement as much as possible. And Hanks was just as eager.

The two-time Oscar winner then joined the WWE star on stage, saying, “Dwayne, I could not possibly turn this down. I’m in. Let’s go!”

It’s worth noting that a lot of liberals took him seriously. Which is just sad.