Trump is facing more threats of war than any other president in history. And he just proved he’s ready to go on offense with two quick surprises.

If you’ve followed the news at all, you probably know the name Otto Warmbier. He’s the American that was arrested in North Korea for stealing a poster of Kim Jong-il, the former dictator. 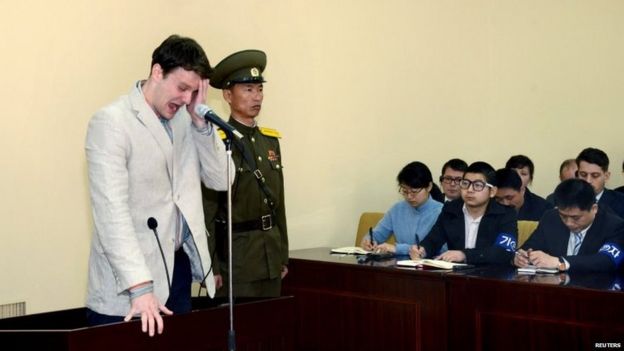 North Korea makes nuclear bombs, tests them in defiance of the world, threatens other nations, and starves its own citizens. And it arrests and kills Americans, for stealing posters. And Trump finally sent Kim Jong-un a message he won’t forget:

Two B1 bombers, breaking the sound barrier over the country that no American plane is supposed to fly over.

But we did. Or, rather, Trump did.

The Tuesday flyover was thought to be part of Trump’s response to the unfortunate death Monday of 22-year-old Otto Warmbier.

Kim, mind you, will know exactly what this show of force means. It’s not the first time bombers have flown over Korea.

[B1 bombers have] twice flown over or near the rogue communist state in May in response to Kim’s testing of new ballistic missile technologies.

But this would be the first time the bombers have flown on behalf of a single person. Given that Kim reacts every time to one of these flights, I have no doubt he’ll get the message – but given that he’s absolutely nuts, I don’t see him backing down.

Of course, given that we can fly over the country, I don’t see that being a problem. And it wouldn’t be just us fighting North Korea – all the surrounding countries are eager to help.

The 10-hour flight for the two supersonic bombers involved separate training missions with F-15 fighter jets from both the Japanese Air Self-Defense Force and the Republic of Korea Air Force.

It goes without saying that training missions with Japan and South Korea are completely about one, and only one, threat – North Korea. It’s not like we train with Japan to counter a threat from Australia.

Trump is proving he’s up to any challenge.