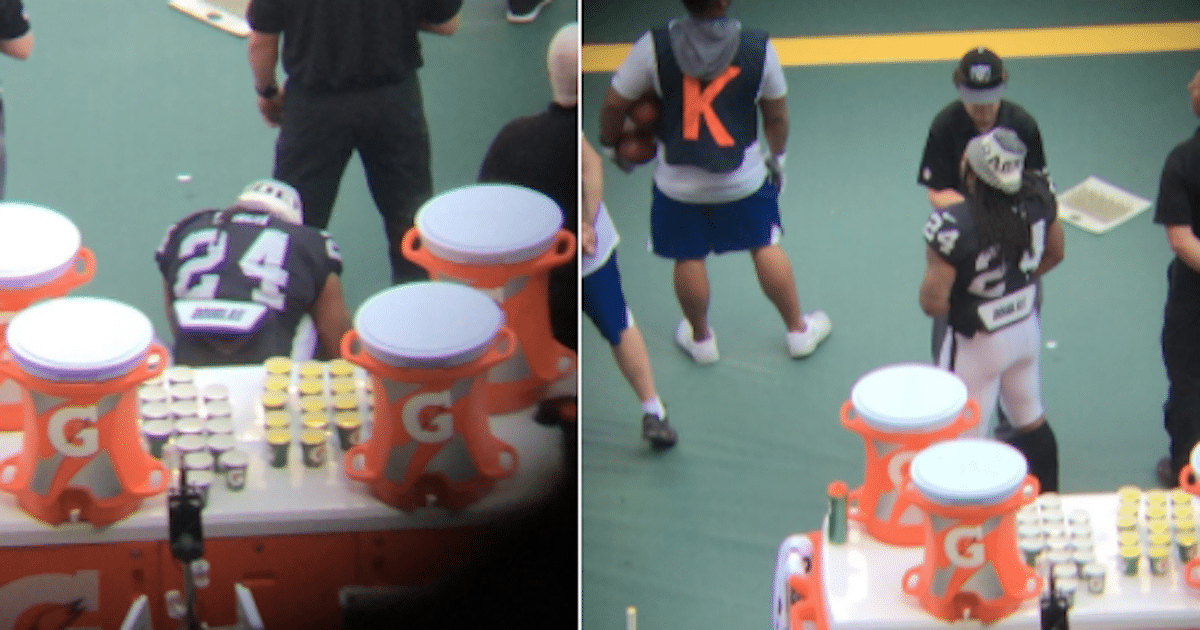 Just when you thought the protests that have enveloped the National Football League were finally coming to a close, another player goes ahead and makes a completely outlandish decision.

While there are still some players that engage in protests, the number has dropped dramatically in recent weeks.

That’s because many players are finally getting the message: refusing to stand for the National Anthem is unconscionably classless and disrespectful regardless of the reasons for doing so.

Those sentiments apply even more strongly when the player engaging in such protests is doing so for incredibly unclear reasons.

No good comes from the sight of a well-paid grown man acting like a petulant child. We’ll hold out hope that the rest of the protesters allow that message to sink in.

Perhaps the sight of one of their colleagues making a complete buffoon of themselves will spark a light bulb moment.

“Oakland Raiders star running back Marshawn Lynch sat on the bench Sunday during the America’s national anthem, but stood for the Mexican anthem.

Boston Globe reporter Ben Volin tweeted out photos of Lynch during both anthems for the game against the New England Patriots, which was played in Mexico City.”

Marshawn Lynch sits during the US national anthem, stands for Mexican anyhem pic.twitter.com/8wdaKprEki

Lynch’s reasons for doing what he did are unclear. Judging by his ridiculous actions, we’re going to go out on a limb and assume he has no idea either.

However, it’s quite clear that Lynch wanted to make a spectacle of himself. Mission accomplished on that front, but he has forever damaged his own reputation.

Mexico has a horrible record on human rights. Human Rights Watch points out that state sanctioned murder, torture and abuse are common in the country. Lynch stood for Mexico, where clean cops and good journalists are endangered species.

The drug war alone has also claimed the lives of 200,000 people. It is a bloodbath south of the border.

This is an incredible amount of disrespect. What is Lynch thinking by standing for the Mexican anthem, but not America’s?

There is absolutely no comparison between the United States, who Lynch won’t stand for, and the horrific things that happen in Mexico. Absolutely disgraceful decision by Lynch.

President Donald Trump is among the many that are beyond ticked off by Lynch’s lack of class, and he took to Twitter to offer up an outstanding suggestion.

Marshawn Lynch of the NFL’s Oakland Raiders stands for the Mexican Anthem and sits down to boos for our National Anthem. Great disrespect! Next time NFL should suspend him for remainder of season. Attendance and ratings way down.

That’s not going to happen. League officials have tiptoed around the protests from the get go, and their complete lack of attention allowed things to snowball out of control.

As a result, a brand with a once impenetrable moat has been forever damaged. It’s the proverbial ‘jump the shark’ moment: While the NFL isn’t going anywhere anytime soon, things just aren’t the same for a whole host of viewers and fans.

Those viewers and fans used to absolutely love the escapism that the NFL provided for them. Sadly, those days appear to be a quaint reminder of the past.