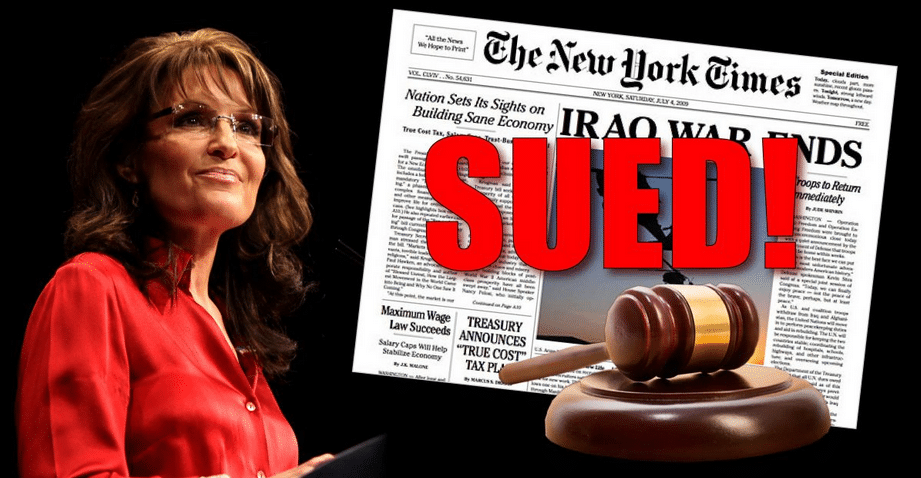 The conservative we all love, the Governor of Alaska, is about to bring down one of the great Fake News producers of our day. And we get to watch.

Let’s catch you up – because if you missed it, Sarah Palin is suing the New York Times.

At issue is an editorial, one that blamed Palin for a public shooting in 2011. It’s an old liberal story, it’s false, and it’s pure idiocy.

But libs still believe it. And they published it in the Times, and Palin finally had enough – she’s suing for defamation.

That lawsuit just got some good news – when the New York Times retracted their story, they ended up printing the same bad information in the retraction.

That’s right – the world’s most liberal paper just perjured themselves, while trying to explain away their crime. You just can’t make this stuff up.

America’s formerly most respected newspaper is being sued by Sarah Palin for defamation after publishing a hit-piece that falsely claimed that the shooting of Gabby Giffords was a “direct” consequence of Palin’s PAC. The New York Times has now defended itself. Its excuse: it was just “an honest mistake.” There’s just one problem: the Times published a story proving it knew its own claim was false.

You probably remember the Giffords shooting, not least because the Left was quick to blame Republicans and conservatives everywhere for the actions of one person.

But liberals quickly settled on Sarah.

Palin, being the smart politician that she is, had given out maps of areas that needed to be targeted by Republicans.

One of those places was Gifford’s district.

And libs, using their typical idiot logic, thought this: ‘a target! Naturally, this is the reason that a paranoid schizophrenic decided to fire a gun into a crowd!’

(It wasn’t. It was his paranoid schizophrenia. I can’t believe the left even needs this explained.)

The link between Palin and the shooter has been completely, utterly, and thoroughly debunked. But the Times still printed it, six years later.

That was what sparked the lawsuit. It’s what happened next that’s so unbelievable.

Read this part of the new and edited Times piece:

At the time, we and others were sharply critical of the heated political rhetoric on the right. Before the shooting, Sarah Palin’s political action committee circulated a map that showed the targeted electoral districts of Ms. Giffords and 19 other Democrats under stylized cross hairs.

And it shows that everyone at the Times already knew it was bad information.

Congrats, lib reporters. You just hung yourself on your own words. I hope Palin drains you of every last dime you have.