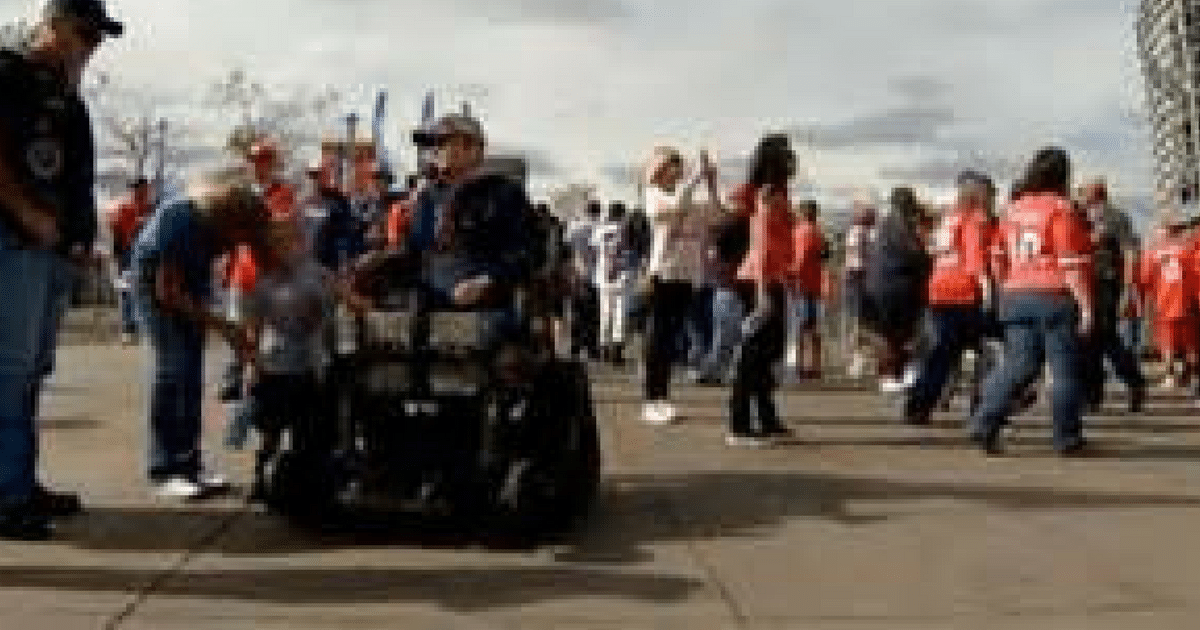 The best way to identify a hero is this: find him or her doing something that they normally can’t do. That no one can normally do. And then see if the ‘impossible thing’ is being done for noble reasons.

Case in point: a lot of libs have called the football players who kneel during the National Anthem ‘heroes.’ Ironically, libs say this because the athletes are ‘standing up for what they believe in’ – even though no one is standing.

Except one person. He’s standing…and he is the only person around who can’t actually stand.

See, he’s paralyzed…from a sniper’s bullet in Iraq. And yet he found the strength to stand during the anthem.

Tell me again who is the real hero?

On Sunday, the media painted the men and women who took a knee for the national anthem as American heroes. Yet, on the selfsame day, a paralyzed war veteran who cannot stand on his own rose outside of an NFL stadium to remind our nation who the real heroes are.

After all, the bullet that paralyzed him from the chest down could easily have hit his head.

“I’m paralyzed from the chest down. I can’t stand up by myself.”

While some of Keil’s hometown Denver Broncos have knelt down on Sunday, Keil was standing outside the stadium with the help of a special wheelchair, engaging in his own counter-protest against the NFL’s widespread disrespect of the American flag.

“The message that we’re all hoping to send is that not standing for the national anthem does nothing but disrespect every service member and their family members who ever fought for this country.”

Matt Keil (center) stands for the National Anthem before today's #Broncos game. He was critically wounded in Iraq in 2007 #9news pic.twitter.com/pnoxDxUZTa

Here is a man who fought for the survival of his country. He’s been injured in a way we can’t even imagine. He can’t stand.

And yet, when he sees people who haven’t fought, are incredibly wealthy, and who have no serious injuries refusing to stand, and take advantage of their incredible blessings, well…he can’t help but stand himself.

“Real men don’t take a knee for what they believe in. They stand up and fight for it. Taking a knee is weakness.”