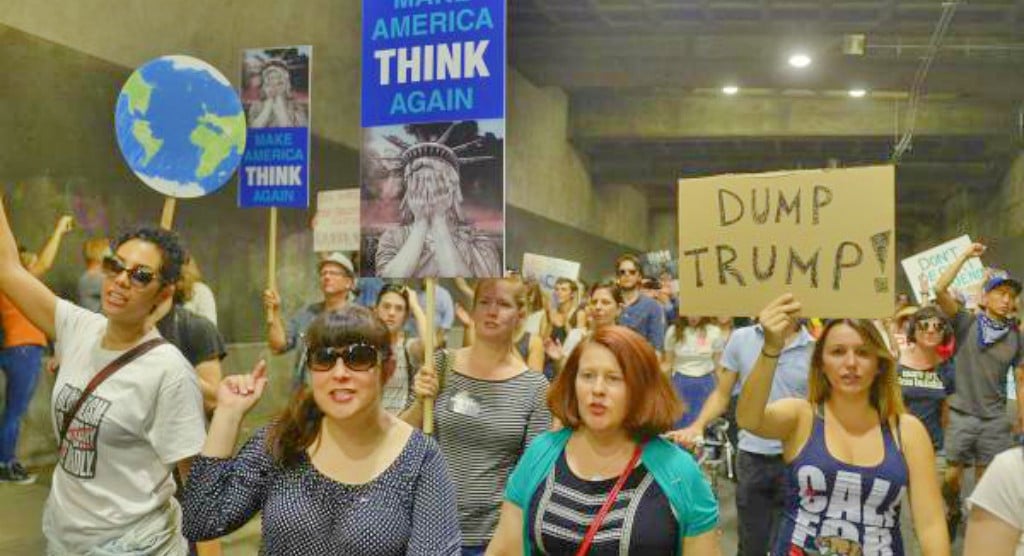 The loud, angry, unwashed and snowflakey hippie crowd that marches against Trump on January 20th will swear, up and down, that they’re marching for Women’s Rights. Or peace, or LGBT equality, or any number of false fronts put up by the angry anarchists, domestic terrorists, and uneducated liberals that usually make up anti-Trump protests.

But in reality? They just hate Trump, and Trump voters. And, finally, people are starting to take notice. And it’s the marchers themselves.

The march facing scrutiny is the Women’s March on Washington, scheduled the 21st, the day after inauguration. While the march claims to be for all women, the truth is far more racist and hateful: this is a platform for liberals to tell white women to sit down, and shut up. The New York Times reports: “[Jennifer] Willis, a 50-year-old wedding minister from South Carolina, had looked forward to taking her daughters to the march. Then she read a post on the Facebook page for the march that made her feel unwelcome because she is white.

The post…advised ‘white allies’ to listen more and talk less. It also chided those who, it said, were only now waking up to racism because of the election.

‘You don’t just get to join because now you’re scared, too,’ read the post. ‘I was born scared.’

Stung by the tone, Ms. Willis canceled her trip.”

The progressive tactic of ‘divide and conquer’ is, thankfully, finally destroying its own. I can’t say I feel very sorry.

Ms. Willis hit the nail on the head: “‘this is a women’s march. We’re supposed to be allies in equal pay, marriage, adoption. Why is it now about, “White women don’t understand black women”?’” Well, Ms. Willis, because it was never about ‘equal pay, marriage, and adoption.’ It was about power – was, is, and always.

Willis is by no means the only woman who has cancelled her trip. The fighting among white, black, and Arab women in the March’s leadership is getting worse and worse. It’s funny how, when push comes to shove, only the liberal activists are the ones who end up being truly racist. Meanwhile, Trump’s administration contains people of all races, shapes, and creeds, and no one there is fighting about who is better.

The March is certain to disintegrate further as Election Day approaches, as liberals start to realize who the real racists are. Like I said before, give liberals enough time, and they’ll show their true colors.