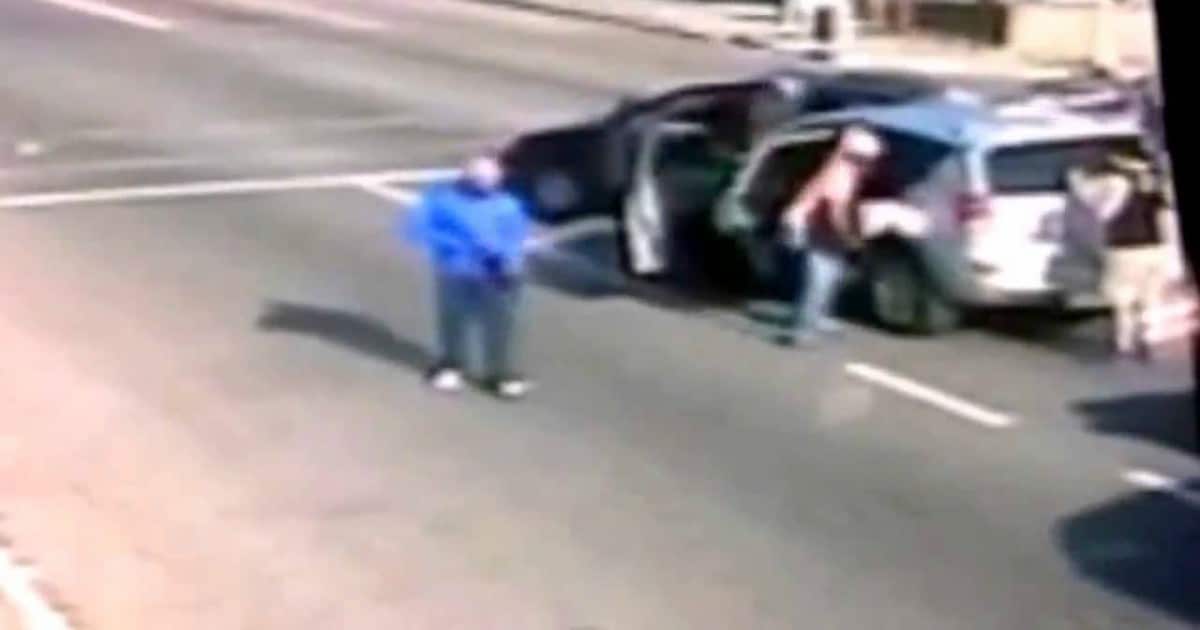 Crime is a plague on our country. No matter where you go, good people face the pain of becoming victims of criminal activity.  It’s getting so bad, even acts of kindness can turn around and bite you.

Such was the case in New Mexico, when three young men were on the road in their car. These guys, like many Americans, were good natured people. They may have been busy, but not too busy to stop and help someone in need.

So when they saw a man on the side of the road in need of a ride, they didn’t hesitate to pull over and take him where he needed to go. Sadly for them, though, this wasn’t just an innocent person in need, this was a criminal.

The three men gladly drove the man to his drop off point. But instead of getting out and thanking them for the ride, he pulled a gun on them. This hitchhiker was in fact a carjacker. Pointing the weapon at his Good Samaritans, he demanded they get out.

There was only one problem: these three guys were no ordinary guys. They were football players. These smart, tough men waited for the right opportunity. They weren’t going to let this scumbag get away with holding them up and taking their car. So when the carjacker momentarily fumbled with his gun, they pounced!

One of the football players landed a blow on the criminal’s face. The other two jumped into action. They gave this would-be thug the beatdown of his life. They proceeded to keep him restrained until the police arrived.

Because of their quick actions, bravery, and impressive strength, these young men were able to bring a crook to justice.

Police arrested a suspected carjacker who clearly messed up when choosing who to try to jack. Angelo Martinez clearly didn’t do the math and thought that stealing a car from three football players would be a good idea. Nope!

When the three agreed to give him a ride, they reached his drop-off point and he pulled out a gun, telling them to get out of the car. When the moron fumbled his weapon, one of the three football players cracked him right in the face.

The other two jumped in and, well, let’s just say Angelo immediately regretted his decision…

The three players beat the dude down and restrained him until cops arrived. It turns out the suspect’s gun was fake, but he did have a real knife and a note that said, “Give me the keys to your wip and a nobody get heart. I know where you live so don’t make me kill.”

We’re pretty sure he meant nobody will get HURT, but he’s not the smartest guy, so maybe he really thinks that’s how it’s spelled.

While Martinez’s gun was obviously a fake, he did have a knife. Along with that bizarre note. I guess he figured, if the gun wasn’t enough to scare them, his grammar would!

It’s quite shocking to think this man thought he could steal a car from three enormous football players. You’d think when he saw the car pull up, he’d just wave them past. “Sorry, I was expecting a little old lady!”

How unlucky is this criminal? Even the sight of a gun wasn’t enough to deter his victims. These men weren’t going to take this carjacking lying down. The second they had a chance to thump him, they did. And boy did they.

Pictures of the criminal after the event are remarkable. His face is so swollen, you can’t even tell he’s a human being! That’s what you get when you abuse three football players’ kindness!

It’s a lesson for all of us. Sadly, acts of kindness are not repaid in their kind. Today, you’re better off driving past someone hitching for a ride.

Unless, of course, you have a few linebackers in your backseat!

With the threat of crime, we have to be more alert than ever before. Even a simple drive can turn into a life or death situation. Be smart, be safe, don’t let a crook take advantage of you.

And if you have a few football playing friends, keep them around!