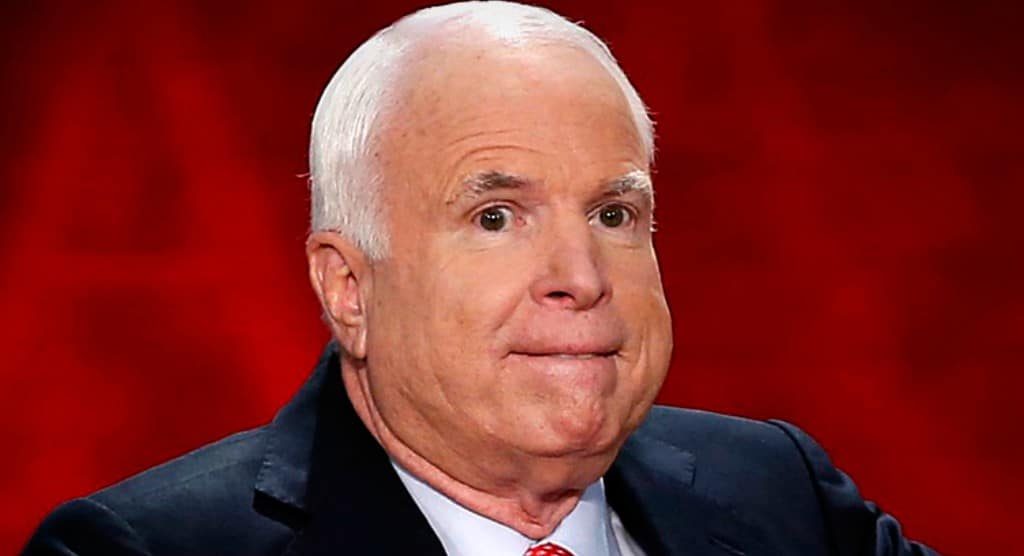 Liberals are getting desperate, and it’s entertaining as hell to watch.

It’s no surprise that the left – with no knowledge of government, or the Constitution, or how to keep a regular job – would stoop terribly low to undermine Trump’s historic presidency.

And it’s no surprise that the biggest loons on the left would be leading the charge. It’s like clockwork – give them time, and they’ll say something even dumber and crazier than they’ve said before.

I swear, sometimes reality just gives you these facepalm moments, gift-wrapped to perfection.

Apropos, I submit to you today’s hilarious liberal idiocy: making John McCain a temporary president. And the liberal idiot leading this charge? None other than Rosie O’Donnell.

Rosie, the liberal icon whose personal beef with president Trump took on epic proportions during the general election, tweeted this yesterday:

Twitter erupted, naturally, and people’s first question was the most obvious one: why, and on what legal grounds?

Rosie’s response was priceless: TREASON IS THE REASON. Because, apparently, it’s more legal and Constitutional if it rhymes.

O’Donnell’s longtime hatred of Trump has gotten much worse since the election, and her statements and tweets have grown more and more wacky and unhinged ever since she called him a snake-oil salesman back in 2006. While Trump has never been afraid of firing back, his work as a businessman and a politician since then has allowed him to take the high road and ignore most jealous rivals in the low-ratings media. Rosie, though, is one of the few that hasn’t let go, or let up. This, however, is the first time she’s suggested something illegal, unconstitutional, and simply crazy.

Crazy is as crazy does, I guess.

It’s doubtful that the attention given O’Donnell would be as strong as it is were it not for her job on The View, which allows her several hours each week to lie and scream her opinions to a gullible audience – one which, thankfully, has grown smaller and smaller each year. Hopefully, as Trump takes office and gets to work fixing America’s Obama problem, she will shut up for a while and let him work.

But I wouldn’t cross your fingers.