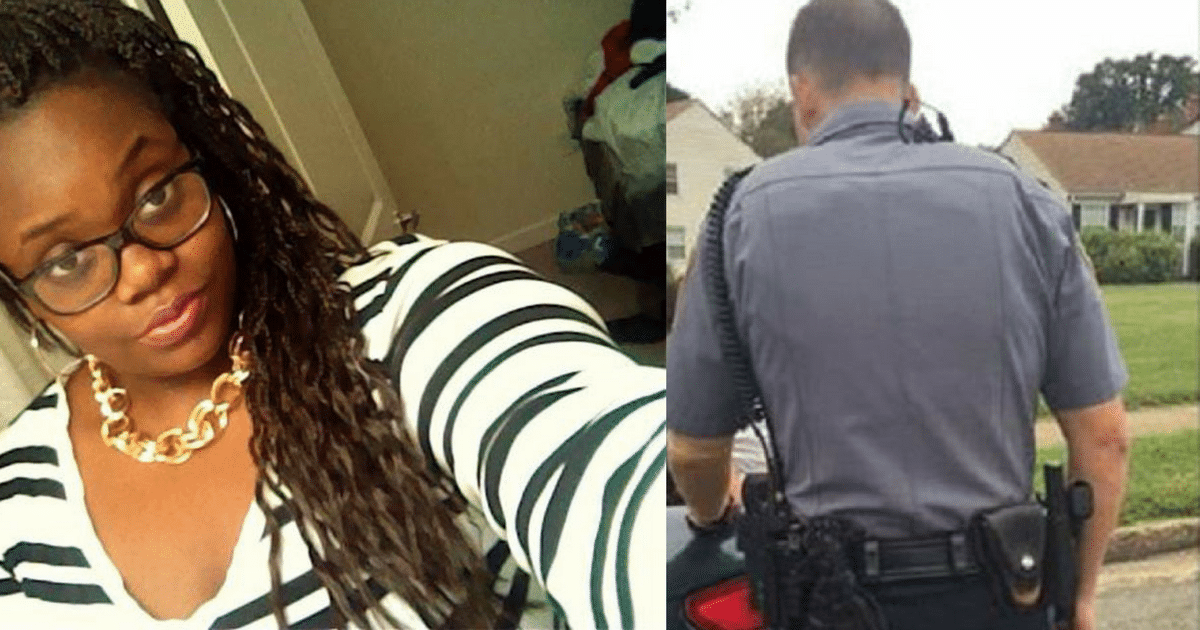 We often try to find stories that prove the American people are nothing like what the media claims. This is especially true when dealing with people of other races. Despite our differences, most of us look out for our neighbors.

We recently highlighted a story about a police officer who went above and beyond the call of duty to help a black woman during Hurricane Harvey.

The truth is, those kinds of stories happen more often than the media wants to admit. That’s just what Chy-Niece Thacker, a black woman from Virginia, discovered recently.

She was on her way to an interview. As you can imagine, she was nervous about the meeting. This could mean a new job, a new life for herself and her family. That’s when she saw police lights in her rear-view mirror.

Pulling over, she expected the worse. On a day when she did not want to deal with it, she was being stopped by a cop. As you would expect, Thacker went to her purse to find her license and registration. But when Officer William Jenkins reached her window, he said something she didn’t expect.

The officer did not want to see her I.D. He just wanted to notify her that her brake lights were out. Instead of looking for a chance to punish this driver, he simply wanted to tell her this, so she would be safe.

As surprised as she was at this turn of events, she was even more surprised by the news. That’s because she just had gotten those lights repaired a month ago. But what happened was even more amazing.

So this happened just now. I'm on my way to go to my interview this morning when I get pulled. Both brake lights decided…

When a woman was pulled over by a Virginia police officer, she was asked to do something she never expected. Now, it’s going viral.

Chy-Niece Thacker, an African-American woman, was on her way to an interview on Sept. 1 when Officer William Jenkins pulled her over.

As she fumbled in her purse for her driving information, the Henrico County police officer gave an order she [would not have] predicted.

“Don’t worry about pulling anything out,” he said. “I just want you to know your brake lights are out.”

This surprised Thacker, as her brake lights were repaired less than a month before.

That’s when Jenkins surprised Thacker again; he asked her to pop the trunk so he could take a look…

In fact, the kind officer made such an impression on Thacker, she decided to share about the incident on Facebook.

Some of those commenting on the post said they’ve experienced similar pleasant encounters with Officer Jenkins.

This officer went out of his way to help someone when he didn’t have to, and is getting the recognition he deserves. These kinds of actions make lifelong impressions.

All in all, this officer spent about 30 minutes trying to repair this woman’s brake lights. He told her, “I care more about your safety than giving you a ticket.” His kindness and dedication had a huge impact on the woman. She even went ahead and posted about it on her Facebook page.

Stories like these need to be shared. The media works so hard to cast our local law enforcement in a negative light. They want you to be scared of them, thinking that they only exist to get you into trouble. That’s especially true if you’re a person of color.

But the reality is far different. Our cops are here to keep us safe. It’s not uncommon to meet one who will go above and beyond to help you. That’s just who they are.

Be sure to share this encouraging story with your friends and family.