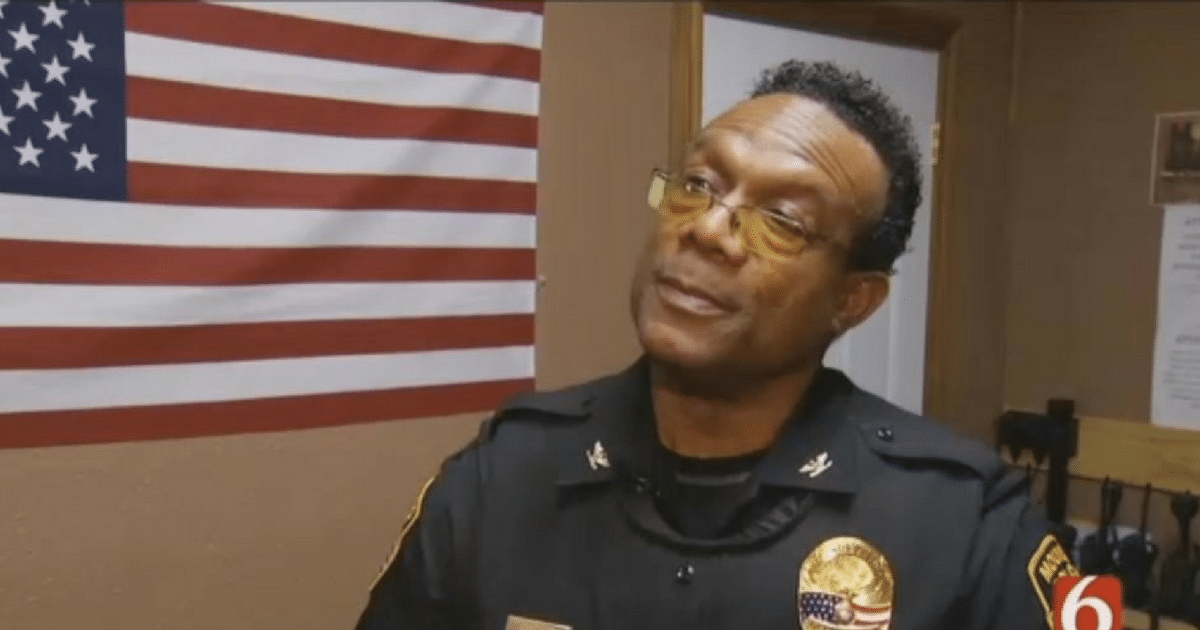 The America Civil Liberties Union (ACLU) has a pretty terrible track record. While claiming to a be group that defends and protects Americans’ civil rights, they’ve long fought against this one fundamental right: freedom of religion.

As a secular, perhaps atheistic organization, they’ve made it their mission to stamp out any mention of God or the Bible from our society. While they have no authority to control what churches and individuals say or do, they attack elected officials and leaders. Their goal: to prevent people of faith from expressing their love and belief in God.

This is why they’ve gone after Police Chief Antonio Porter, of Mounds Police Department in Oklahoma. As a police chief, he has a pretty tough job. Even in smaller towns, crime never stops. Police departments are spread thin, chasing down crooks, arresting violators of law, and making sure regular citizens are safe and secure.

Add to that the constant hate police get from the liberal media, you’ve got people with pretty tough jobs.

So it is a revelation to learn that Chief Porter has found the time to not only keep his town safe, but to share messages of faith and hope to the law-abiding community in his town. How is he doing this? By posting Bible verses from his morning devotion to his Facebook page.

Matthew 21:22All things, whatever you ask in prayer, believing, you will receive.

Imagine that! A police chief who loves God and wants to share encouraging messages with his community. That kind of behavior might go a long way in inspiring the citizens of Mounds, perhaps bring the community together, maybe even discourage future acts of crime.

Not if the ACLU has anything to say about it! Although they are a large, national organization, they have made it their goal to use their considerable resources to attack a small town police chief. Instead of confronting real issues facing our country, the ACLU thinks it’s appropriate to go after a man trying to encourage a few people.

Their claim? That the police chief is using his platform to “proselytize” people. Oh, what a crime! Maybe if a few more people converted to Christianity, there’d be less crime in Mounds. We can’t have that, can we ACLU?

But despite this evil and un-American attack by the left, Porter is not backing down.

Brady Henderson, legal director for the ACLU of Oklahoma, said Porter’s actions are a “clear violation” of the law:

“The exclusive, pervasive promotion of the Christian faith by the Mounds Police Department represents a clear violation of those legal mandates.”

“By promoting one specific religion on its official Facebook page, the Mounds Police Department has established clear preference for that faith above other faiths and above no religious faith at all…”

But even with the ACLU and Henderson breathing down his neck, Porter is digging his heels in, according to News on 6…

The police chief told the local news station he reads a devotional every morning, adding, “right after that, I immediately post them on Facebook and on LinkedIn.” He’s been sharing Bible verses on the department’s Facebook page for about five months, he said.

“When I started making those posts,” Porter explained, “I wasn’t intending really to get any feed or a bunch of likes.”

And certainly to the ACLU’s chagrin, the reaction from the community has been overwhelmingly positive. Porter said: “I would hear stuff like, ‘Wow, I needed this.’ It would just hit right to their heart.” Even the mayor of Mounds, Rosa Jackson, is backing Porter. She herself has said the messages are encouraging and inoffensive.

The fact that a major activist group like the ACLU is attacking a local police chief is so disturbing. They are so dead-set on erasing our Christian heritage, that they will attack a man for simply posting scripture.

But this is the America we are living in now. And this is why we must keep fighting, no matter what.