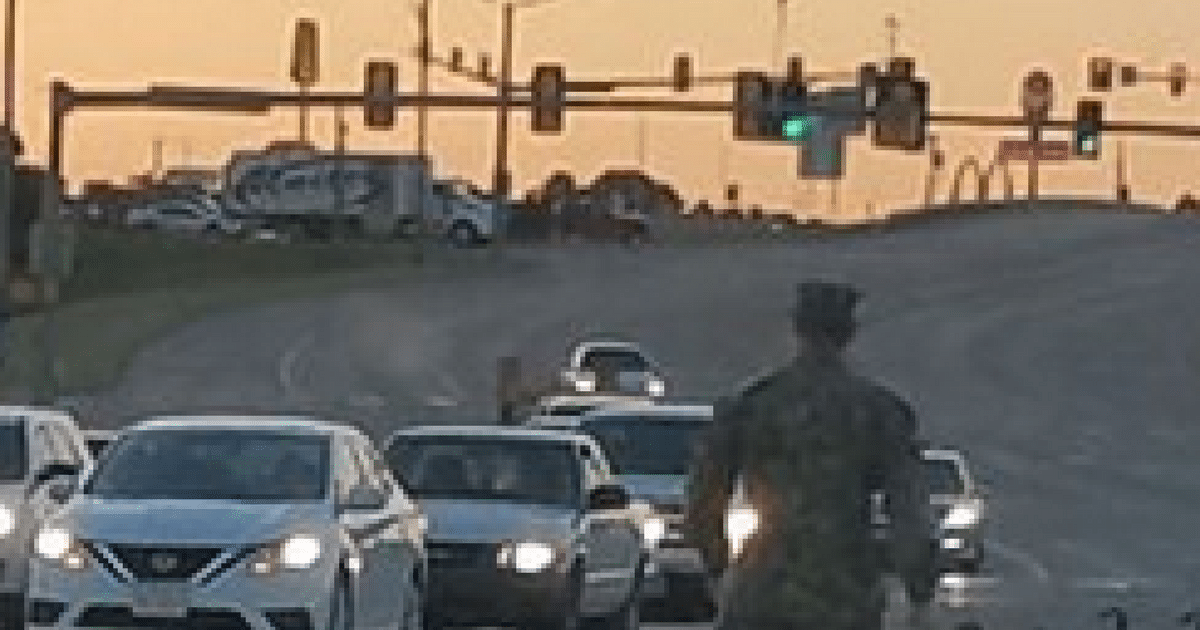 It was an ordinary day for Emily Coker. She was on her way to work, taking her usual route down the main road through town. The sun was just coming up as sleepy drivers and pedestrians started their day.

What was about to happen, though, defied all of their expectations.

As is common, the traffic slowed down. Most days, you have to deal with congested roads due to the high number of people trying to get to work.

But the traffic not only slowed, it stopped. Lines of cars were just sitting in the middle of the road, refusing to move. Even when the traffic light turned green, nothing.

Emily Coker wanted to know what was going on. Was it an accident? Was something happening she needed to know about? Looking ahead she noticed a man in uniform in the middle of the street. He was dressed in the typical camo of a Marine.

But this Marine wasn’t conducting military exercises. He didn’t get out of his car to confront a hostile target. In fact, he was doing something she’d never expect a hardened warrior would do in his entire life.

While the members of our military are usually working to protect human lives, one caring Marine recently went the extra mile to serve another species, and it was all documented by bystander Emily Coker.

Coker was on her way to work when the traffic in front of her suddenly slowed and then stopped. She looked up ahead to see what was going on and noticed a flock of geese trying to cross the road…

As the drivers waited for the geese to cross, a Marine got out of his vehicle and helped guide the geese across the road to safety. Coker took some photos of this anonymous man’s act of kindness, which she later shared with friends on Facebook.

Coker later told Inside Edition, “There were some baby geese at the back and they were going the wrong direction. He just walked up behind them and started shooing them.”

The photos were seen and shared by the city’s Facebook page and have been growing in popularity ever since!

Coker wanted to recognize the Marine and publicly thank him, but so far his identity has remained a mystery. She shared this message on Facebook when she posted her photo: “If anyone knows this sweet soldier please tell him thank you for helping the geese family cross 19th!”

We may not know the name of his kindhearted Marine, but we are not surprised he was willing to do this.

Like many servicemen and women, he has been trained to serve and protect. He’s been instilled with the kind of character that looks out for those in need. Not just people, but animals that might be in danger.

He didn’t hesitate to put himself in harm’s way, to make sure that family of geese got to safety.

It may seem like a small gesture, but it shows the true caliber of our military. Never think they are simply goons with guns. They are proud Americans, who care about all creatures.

That’s something to be proud about, yourself.