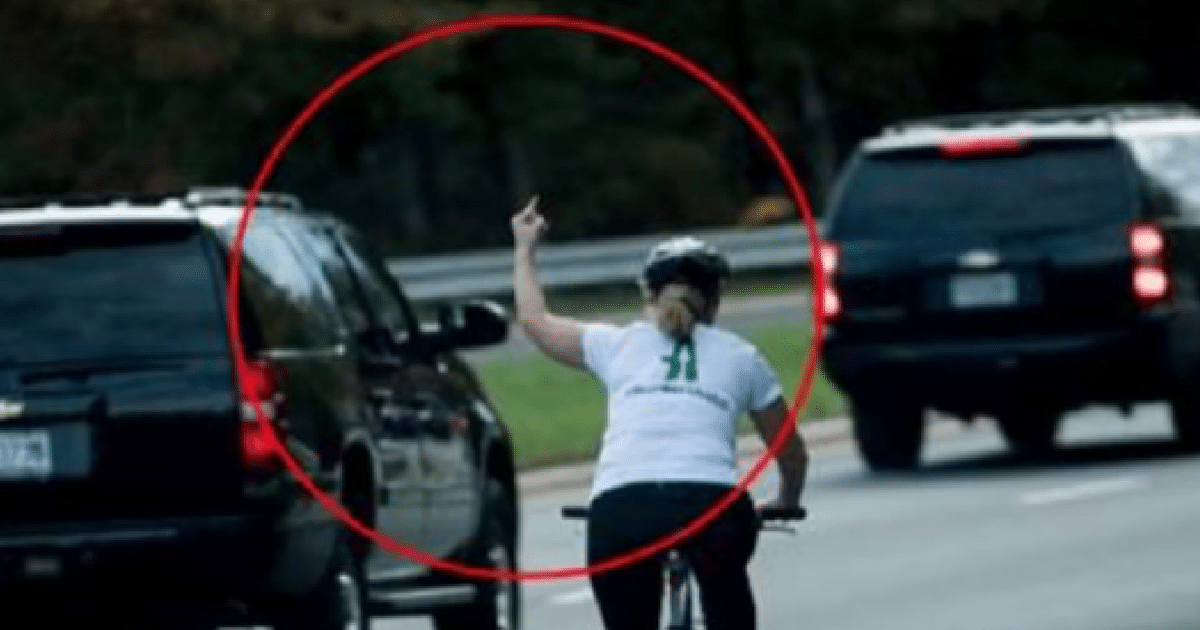 At the end of last month, an image began making the rounds of a woman on a bicycle that flipped off President Donald Trump’s motorcade.

That woman was later identified as Julie Briskman.

For the latest evidence that all is not right in the world, there were actually folks that celebrated this woman as a ‘heroine.’ Allow that to sink in for a moment.

There was nothing heroic about it whatsoever, but perhaps she can list this remarkable achievement on her resume.

It’s going to need some updating anyway, as Briskman has been canned from her job.

At the time, Briskman was working for Akima LLC, a Virginia-based company that holds several government contracts, doing marketing and communications work.

As the photo went viral with users calling her a “heroine,” Briskman’s bosses called her into a meeting Tuesday and gave her the bad news.

“They said, ‘We’re separating from you,’” Briskman told The Huffington Post in an interview, describing the firing.

“Basically, you cannot have ‘lewd’ or ‘obscene’ things in your social media. So they were calling flipping him off ‘obscene.’”

That sounds like a gigantic wake-up call for Briskman, right?

As a government contractor, Akima LLC was concerned that the photo might hurt their ability to win government contracts, The Huffington Post reports. Briskman has no regrets about her gesture, and is even a little pleased she had the chance to make a statement.

“In some ways, I’m doing better than ever,” Briskman said. “I’m angry about where our country is right now. I am appalled. This was an opportunity for me to say something.”

“He was passing by and my blood just started to boil,” Briskman said. “I’m thinking, DACA recipients are getting kicked out. He pulled ads for open enrollment in Obamacare. Only one-third of Puerto Rico has power. I’m thinking, he’s at the damn golf course again.”

There’s a lot to unpack there, but we’ll resist the urge to have a field day at the expense of a woman that is clearly detached from reality.

However, we will encourage her to look into the fact that her ‘blood just started to boil,’ as that is a sign of greater problems afoot.

From a bottom line perspective, she couldn’t control herself. That’s unbecoming behavior from someone in her role, and the company had every right to move on.

As for those that deem her classless and crass behavior as being heroic, we would advise paying attention to the wake-up call that Briskman is choosing to ignore.