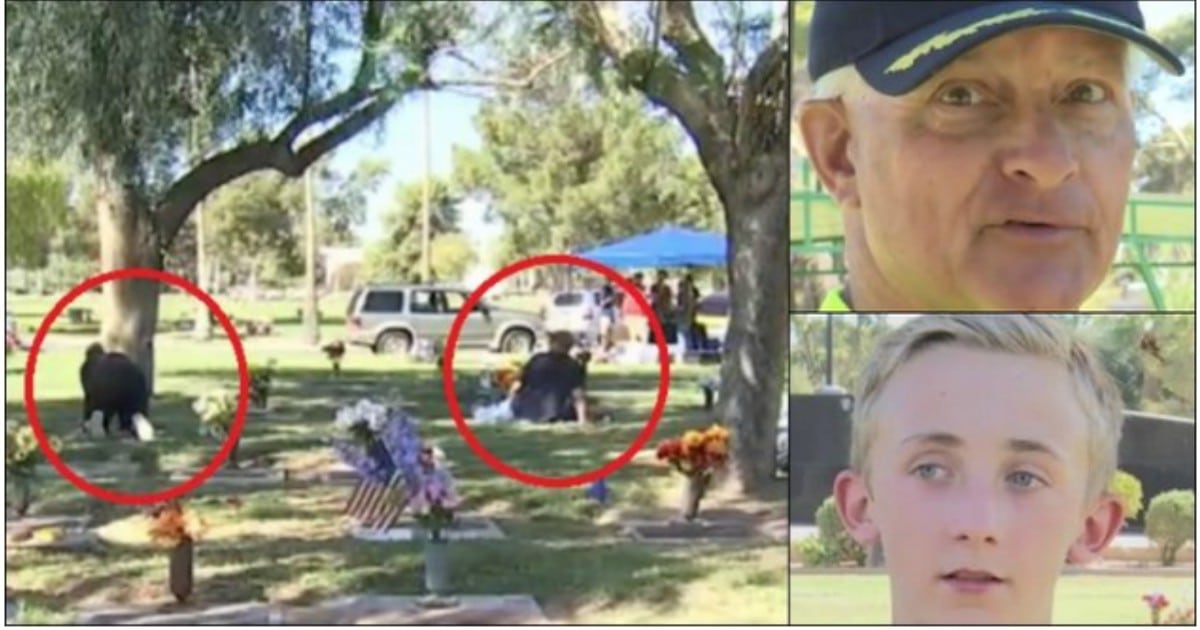 After hearing about the Democratic Party murder of Seth Rich, of North Korea’s threats of nuclear war, of Russia’s threats of war-planes and battleships, and of fake investigations into Russian-Trump partnerships to win the election…well, you’re probably exhausted.

But I have some good news. Stay focused, and keep reading.

It’s no secret that veterans have been misused and abused in this country, from the Left’s attempts to demonize soldiers, to the terrible abuses of the VA. And with that kind of background, you’d expect that two guys hacking away at a veteran’s gravestone in an armed forces cemetery would be bad news.

But praise God, it wasn’t. These guys weren’t defacing the gravestones – they were restoring them.

And the best part? The team doing this spanned two generations. I guess not all millennials are bad.

After several people saw two people lingering near a veteran’s grave site in a cemetery in Phoenix, Arizona, they knew something was going on. However, when they took a closer look, they were left completely stunned by what they had unintentionally caught the pair doing.

The unlikely duo, consisting of Tom Pawlak, who happens to be a baby boomer, and Levi Brown, a young teen, have quite the peculiar relationship.

The pair shares a rare, but beautiful, passion for “restoring veteran’s memorial markers.” They spend their free time together, removing years of tarnish and neglect from the gravestones and making them shine once again.

It’s difficult to describe just how beautiful this is.

Particularly, mind you, in an age when most teenagers are busy holding offensive placards out on busy streets to protest Trump, without having real jobs. Or when college students are so offended by different opinions that they demand Safe Spaces for themselves.

At least one millennial has it right – honor your veterans, and give of yourself to those who have given all they have.

Levi Brown just restored my faith in the Millennial Generation.

The polishing duo is hoping to have a large number of gravestones finished and polished before Memorial Day. And if you live in Arizona, they could use the help. They’d be grateful.

And so would our veterans. Just as we’re grateful for their sacrifice.