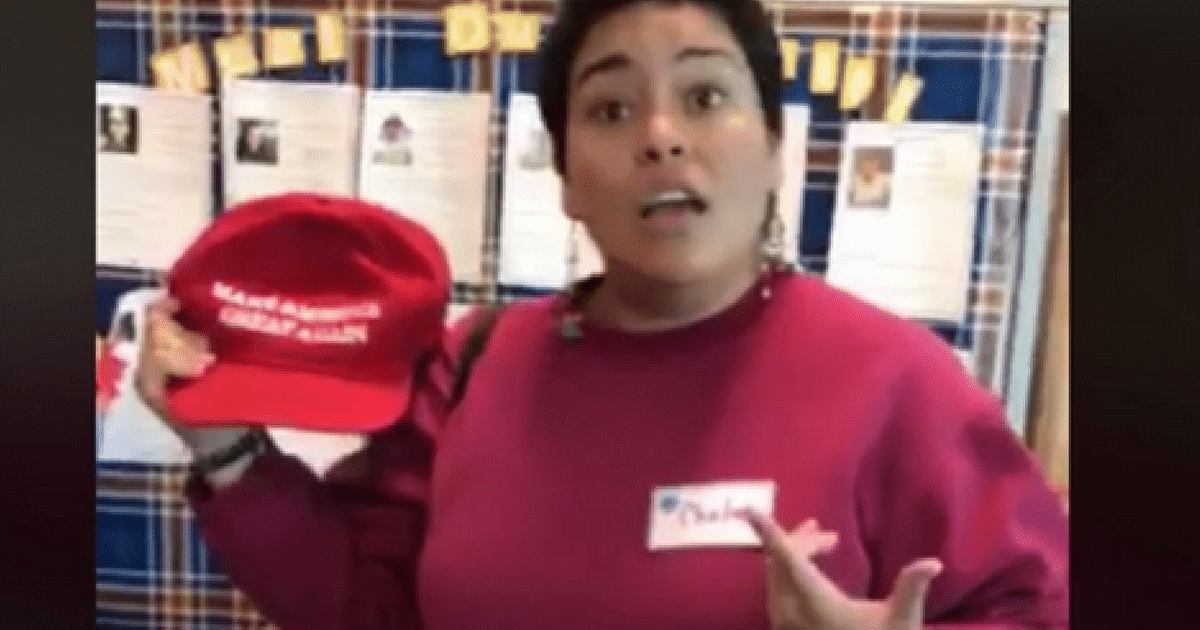 It’s becoming more and more obvious that the Left cannot tolerate opinions besides their own.

Don’t like a conservative in a bar? Just start screaming.

It happens over and over, like a broken record.

And in today’s example, we have ‘don’t like conservative clothing? Just steal it.

Then accuse the conservative of genocide.’

Then, she marched to a campus office and demanded that administrators outlaw “Make America Great Again” hats because they represent “genocide.”

Her name is Edith Macias and she's a senior at @UCRiverside… She committed a crime and stole my friend's property.https://t.co/RRMU8ZGn6A

Before you watch the video, you might want to grab some popcorn. Or a stiff drink. You’re going to need one or the other.

Because starting off with ‘genocide’ is literally the high point of this conversation. It just gets worse from there.

(Again, to be clear – suggesting that a guy wearing a hat is somehow promoting the mass murder of an entire ethnic group? That’s the least facepalming moment of this conversation.)

Watch and enjoy, but it’s best if you prepare yourself.

But if you can’t stand it to the end, allow me to summarize.

A childish woman stole someone else’s property. She took it to the campus’ front office, and tried to get the hat owner in trouble.

Naturally, campus authorities told her that she can’t just take other people’s property.

She then defended herself by saying that the property-owner was in cahoots with the President to lynch and murder whole swaths of people.

And I’m not exaggerating any of this at all.

Some say an incident at @UCRiverside is the latest assault on free speech rights of right-leaning college students https://t.co/2N3RFnQMp0

The thief eventually returns the hat. She tries to leave, but finds some cops waiting for her. And the best part of the exchange – the part where the police painstakingly explain to an idiot that thievery is wrong – is not on video. Which is so very, very unfortunate.

Normally, I’d say something like, ‘well, try to understand your opponent’s point of view before you judge.’

But I’ve got nothing. Consider the highlights:

“Freedom of speech is genocide, homeboy.”

Umm…it’s exactly the opposite of genocide…

“Man, fuck your laws, alright? Do you have any fucking conscience?”

“I fucking hate this country. I’m staying here because there is shit that needs to be fixed…because we need to get rid of all you all.”

Yeah, I’ve got nothing.