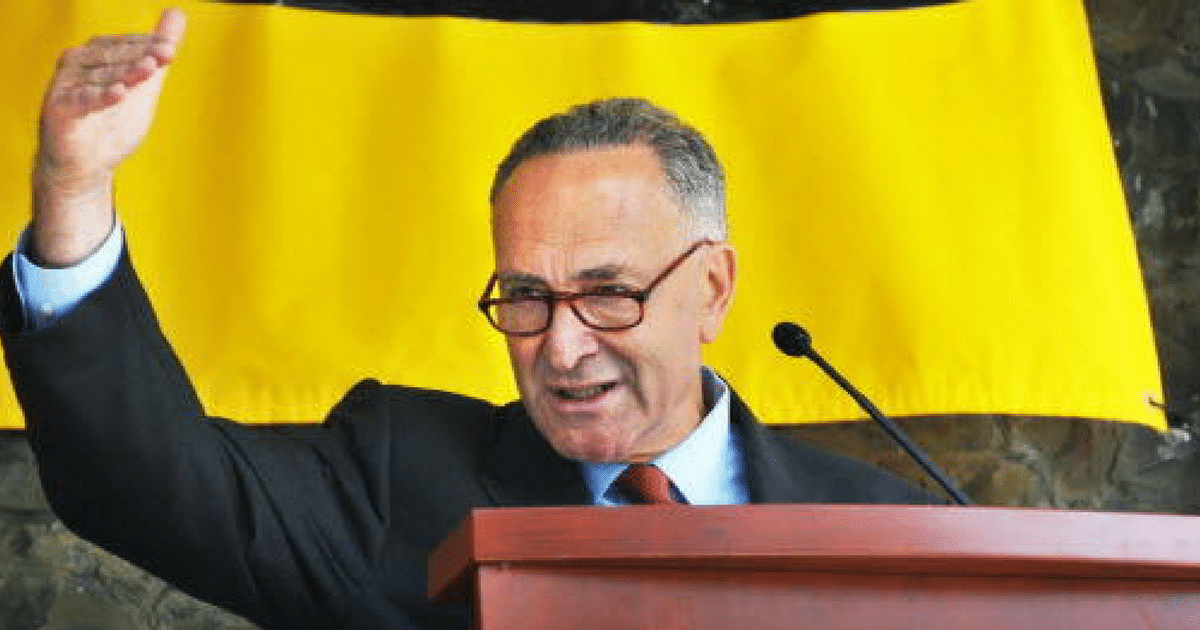 Even a broken clock is right twice a day. Democratic leadership is not all that fortunate by all rational measures of common sense, but they can occasionally pull the proverbial rabbit out of the hat here and there.

While few and far between, there are times when Democratic leaders make perfect sense. Yes, even Senate Minority Leader Chuck Schumer, believe it or not.

Schumer prides himself on being as collicky as possible during the general course of business, and that behavior has ratcheted up even further since President Donald Trump took office.

As Schumer sees it, there is nothing that Trump says or does that isn’t wrong or being done for nefarious reasons.

We won’t hold out hope that he’ll change his ways anytime soon, but we will hope that he’ll find the time to chat with someone that can help him work through his doom and gloom view of things.

In any event, Schumer is ratcheting up the pressure on Trump yet again, but this time it actually makes some sense.

Senate Minority Leader Chuck Schumer criticized President Donald Trump on Tuesday for not following through on his assurances to relocate the U.S. embassy in Israel to Jerusalem.

The New York Democrat called out what he sees as “indecisiveness” on the part of the president, who promised during the campaign to move the embassy from its current home in Tel Aviv.

“As someone who strongly believes that Jerusalem is the undivided capital of Israel, I am calling for the U.S. Embassy in Israel to be relocated to Jerusalem,” Schumer said in a statement.

“Moving the embassy as soon as possible would appropriately commemorate the fiftieth anniversary of Jerusalem’s reunification and show the world that the U.S. definitively acknowledges Jerusalem as Israel’s capital.”

For Trump’s part, he seems to be on the same page with that request, but he’s going to need some time to make it happen.

Schumer’s remarks come after Trump said last weekend that he wanted to wait for the results of Israeli-Palestinian peace talks before he makes a decision on relocating the embassy.

“I want to give that a shot before I even think about moving the embassy to Jerusalem,” Trump told Mike Huckabee during a radio interview, according to Reuters.

“If we can make peace between the Palestinians and Israel, I think it’ll lead to ultimately peace in the Middle East, which has to happen.”

For now, Trump has indicated that he’ll be making a decision on the issue in the near future. We’ll wait and see how that turns out, but we won’t let the fact that Schumer has acted like a grown up for once to go unnoticed.

Requests of the president from the other side of the aisle, and we’ll include criticism that’s warranted in that category as well.

However, we’ll draw a gigantic line in the sand on the incessant negativity and sky is falling narratives that typically emanate from the Left each and every day.

Every issue is not the end of the world. It’s possible to go to the table and negotiate a solution that works for both sides without constantly puffing your chest out like a peacock.

Perhaps Schumer can use how he’s handled this situation as inspiration for that, but we’ll remain understandably skeptical that it won’t come to pass.