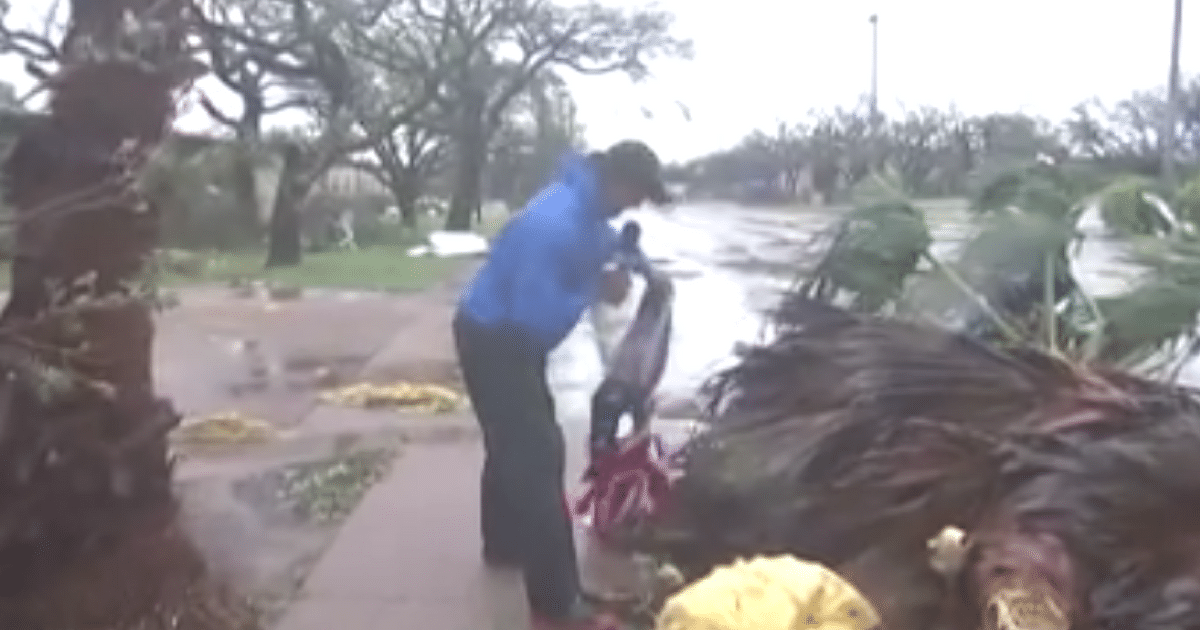 Hurricane Harvey hit Texas last week, but it still rages across parts of the country.

The devastation felt in parts of Texas defy belief. The major city of Houston has seen flooding upwards of 30 inches and more. Countless homes, businesses, and communities are underwater. People have been forced out of their towns.

Rescue workers and relief services are working around the clock. News crews, as you can imagine, are everywhere, bringing stories of tragedy, and a few of triumph.

One meteorologist, Paul Goodloe, was on site in Rockport, TX, just after Harvey came through. Like most news reporters, he accompanied his camera crew to show the world the damaged caused by this powerful storm.

As far as the eye could see, there were downed trees, power lines, and damaged buildings. The streets were void of people. Homes were empty. Schools battered and bruised.

But among the wreckage, Goodloe caught sight of something. It had been knocked down by a tree, caught up in the jetsam of the storm. It was an American flag.

Goodloe saw the symbol of our country lying in the water and dirt. He knew he had to take action. Stepping away from his crew, he waded over to the downed tree that was pinning the flag to the ground.

He proceeded to put his expected coverage of the storm on hold as he took his time to fold up the flag. With the aid of one of his crew members, they folded up Old Glory as best as they could, as they wind whipped through the streets.

Goodloe returned to his reporting of the storm, proudly holding the flag, tucked under his arm for the rest of the segment.

The video of his considerate and patriotic act found its way onto Facebook, where it has accrued significant views.

Posted by The Weather Channel on Saturday, August 26, 2017

Hurricane Harvey has pounded the Texas shoreline since Friday afternoon.

The Category 3 storm has ripped apart business, sent torrential floods and taken the lives of at least five people. Conditions in affected cities, such as Houston and Galveston, are expected to worsen.

However, as it is with all dark moments, there is light…

One of the few bright spots in the coverage of the hurricane came from the Weather Channel. Reporter Paul Goodloe discovered an American flag lying soaked on the ground in the wake of Harvey’s destruction.

Goodloe is no stranger to scenes of destruction after storms. The veteran meteorologist has been with the Weather Channel for nearly two decades. When he saw the American flag lying on the ground in Rockport, Texas, he knew what to do.

“I’m gonna have to pick that up,” Goodloe says, approaching the ragged Stars and Stripes sitting in the rubble of a parking lot.

“I can’t let Old Glory just stay here like that.”

“Make sure this isn’t a casualty to Hurricane Harvey.”

In the midst of all the pain and suffering caused by this massive storm, it’s heartening to see a reporter stop to pick up the flag.

There are brave men and women working around the clock to rescue and aid those in need. Times like this show the real character of Americans. They will stop at nothing to help their fellow man, despite their differences.

This simple act by Goodloe encapsulates the spirit of the American people. We love our country. We care about not only its people, but our flag and what it represents. 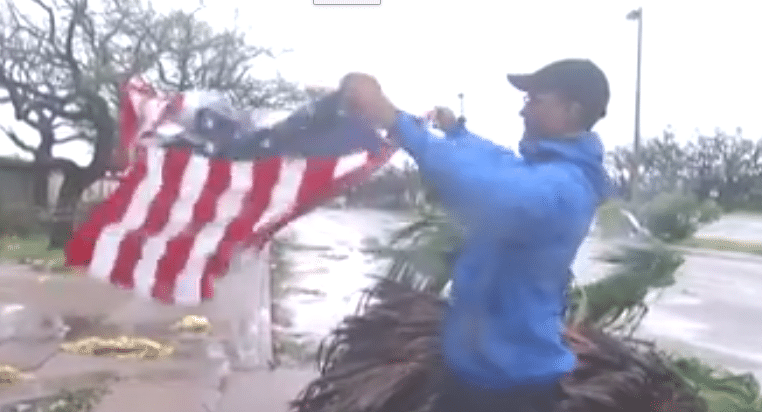 Taking the time to rescue this flag and respectfully folding it up is a powerful image of how we must respond to disaster. Yes, we’ve been knocked down. Yes, we are feeling the blow. But we must get back up and do all we can to soldier on.

It’s the little things like this moment that help us look to better days. Even in the middle of a terrible storm, we can look out for the things that make us who we are. That includes the Stars and Stripes, the symbol of the Union, the symbol of freedom and democracy.

The original video on Facebook has received over 12 million views. With over ten thousand comments. And counting. This simple act by Goodloe is inspiring Americans all over the country. It is igniting a little bit of hope.

That’s something we can use, in times like these. And it’s a reminder that, despite our many differences, all Americans are united by our love of country, liberty, and concern for one another.