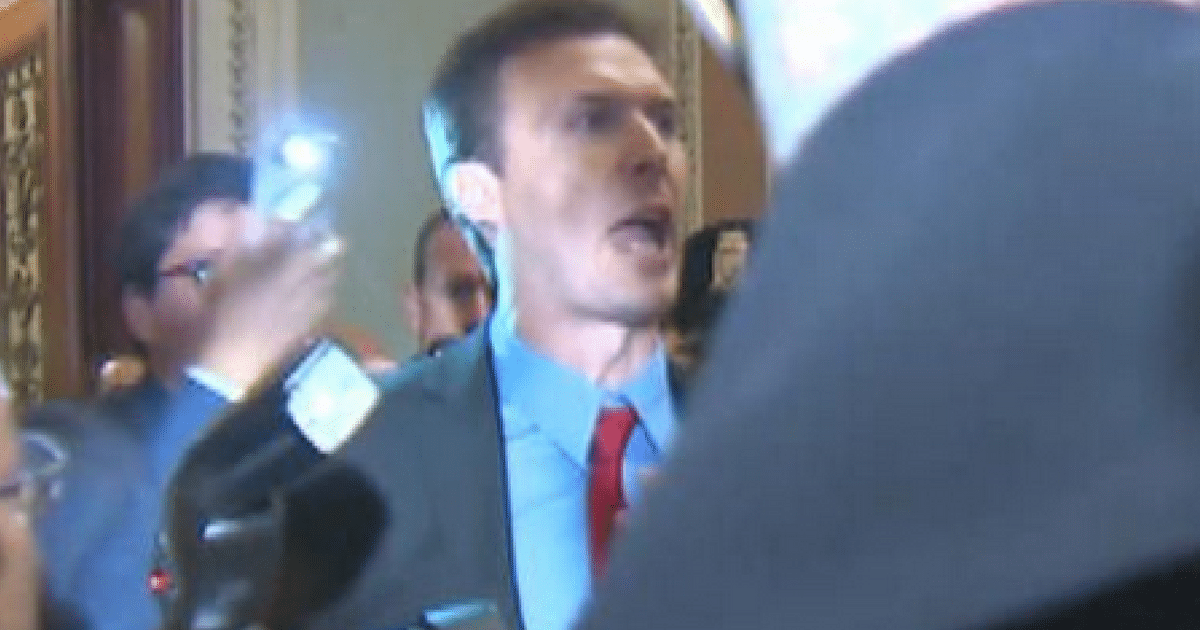 It should be obvious by now that the Left thinks that the 1st Amendment applies only to them. They are the only ones who get free speech – everyone else can get shouted down, sued, or protested into oblivion.

Fortunately for the rest of us, one idiot lib just learned the hard way that that’s not how it works. Because, sometimes, acts of ‘free speech’ coated in violence can be treated as acts of violence.

You want to shut someone up for speaking the conservative truth? Well, maybe try talking decently to them. But if you punch them…you’re getting prosecuted for assault. And it doesn’t matter that you were trying to exercise your ‘free speech.’

In related news, the poor fool that threw Russian flags at Trump is now being charged.

And the saddest part? His followers think he’s a literal superhero.

Anti-Trump protester Ryan Clayton was able to enter a press area and throw Russian flags at President Donald Trump while he walked to a planned Senate Republican lunch.

Sure…he was able to ‘enter’ a press area. I’m guessing that a member of the never-Trump press just let him in. But I digress.

Clayton was immediately taken away by Capitol Police. He started to shout to members of the press that the nation should be talking about Trump’s “treason” instead of tax cuts.

Capitol Police revealed Clayton was only charged with a misdemeanor.

Don’t let the ‘only’ get you down. Clayton has been charged with a misdemeanor…so far.

But other charges could be coming. Including one that brings with it – wait for it – jail time.

Ryan T. CLAYTON, 36, of Sterling, Virginia, was preliminarily charged with § 10–503.16, Unlawful conduct. The incident continues to be under investigation.

That ‘unlawful conduct’ charge is the doozy, and the one that brings the jail time. It’s still pending, so cross your fingers.

Because it’s about time that one of these protestors learns the hard way that there are consequences to trying to sabotage the Commander in Chief.

Ryan Clayton who threw Russian flags at @POTUS is arrested &charged with unlawful conduct: Was on Capitol watch list https://t.co/HRT6kHPXYQ

Maybe prison would teach Clayton a lesson. But I doubt it. After all, his supporters still think very highly of him.

Ryan Clayton is dedicated to protecting the First Amendment. Captain America? We think so.

That’s right – the left thinks that throwing flags makes you a superhero. Not so much protecting the flag, though.