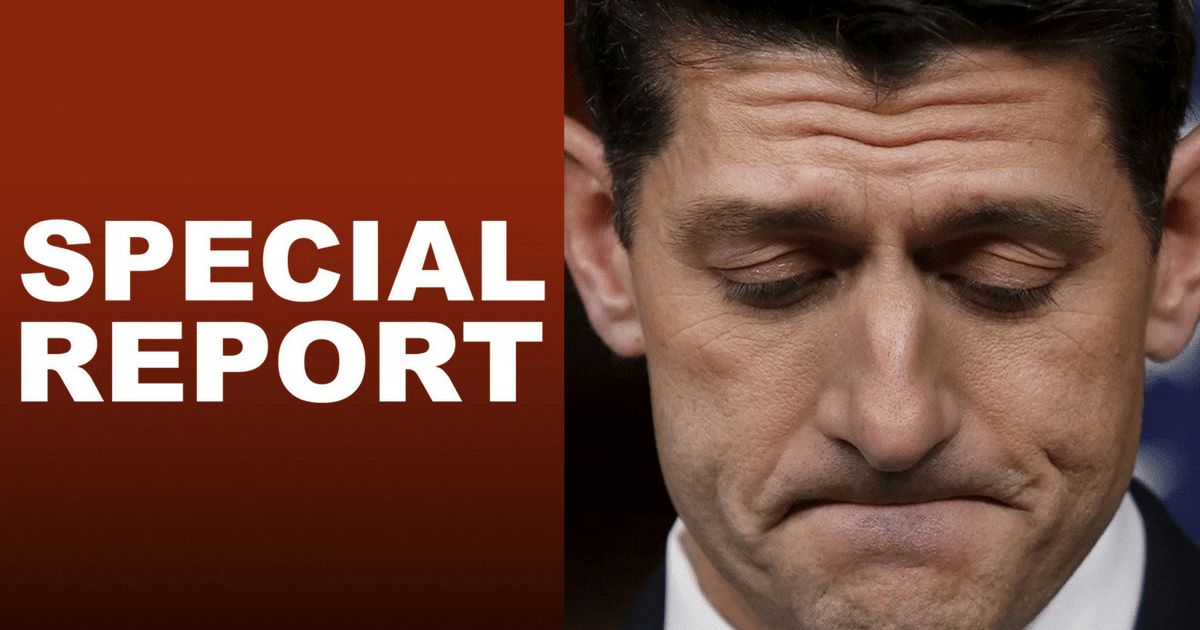 Republicans told people for eight years they would stop Democrats’ anti-American agendas and oppressive laws if given a chance to lead.

President Donald Trump gave Republicans all the political power they need with his election by the people, and these so-called “leaders” have failed.

Now, Republican leadership is being exposed for the swamp dwellers they are while Democrats sit on the sidelines laughing at their own success while Republicans fight among themselves.

Swamp rat and House Speaker Paul Ryan, R-Wisc., was gifted all the power he needed to conquer GOP goals. Instead, his GOP-dominated House has been a joke completing anything meaningful. His popularity with the people is gone.

Only 31 percent of respondents give Ryan a “favorable” rating, according to an NBC News/Survey Monkey poll released Thursday.

The message from voters is clear — Paul Ryan is done and it’s about dang time!

His rating barely beats liberal activist Nancy Pelosi, D-Calif., who was given a 30 percent approval rating in the poll. Pelosi, the House minority leader who hates President Trump, is laughing at the results.

The king and queen of the swamp are equally disliked in the poll. Both are “unfavorable” in the poll by 64 percent for Pelosi and 63 percent for Ryan.

While Pelosi and Democrats laugh in celebration of this back-handed victory, Ryan faces serious backlash for his similarities to Democrats and his favor for liberal policies.

The depth of Ryan’s deceit was further exposed by his recent Democrat-leaning support calling on Trump to uphold the Deferred Action for Childhood Arrivals (DACA) program for the children of illegal immigrants.

Over and over again, Ryan challenges or discounts anything President Trump pursues related to illegal immigration.

Ryan doesn’t stand alone for faltering in the eyes of the people for not backing the president.

“One need not be a political scientist to understand these dismal numbers for Ryan and McConnell. Both have been exposed as massive liars and frauds, both have serially-betrayed their base, both are terrible leaders who are unable to use a historic, once-in-a-generation opportunity to get a single thing done,” wrote John Nolte on Breitbart.

“Ever since losing the presidential election with running mate Mitt Romney back in 2012, Ryan has become more and more left-leaning on nearly every important issue. He even went as far as opposing Donald Trump all the way through election day. Now, Ryan gets news he probably should’ve seen coming. … Well deserved, Paul. Well deserved,” John S. Roberts wrote on Young Conservatives.

Republicans must demand their representatives act against the constant deceit and failure of congressional leadership.

President Trump ushered in a new era of opportunity to accomplish Republican goals.

Swamp rats such as Ryan and McConnell have failed repeatedly and need to get on board or get booted out of the way.