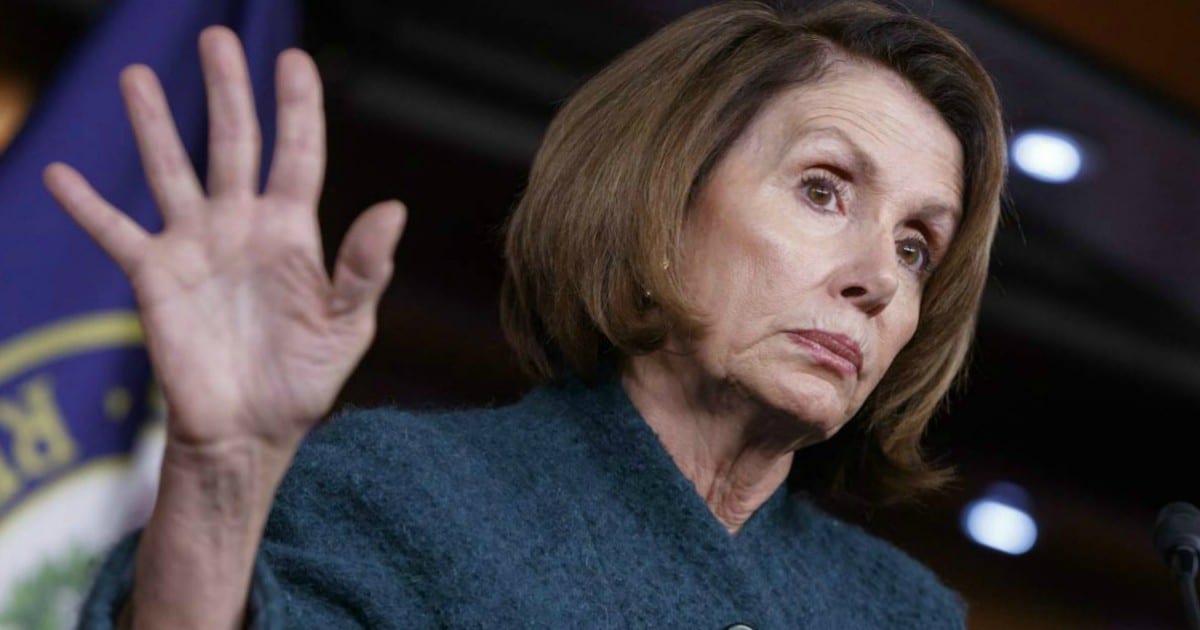 One of the biggest reasons Americans voted in massive numbers for Donald Trump, was their disgust over the democrats.

For eight years we’ve suffered through their failed policies. Policies that only made our country worse.

Perhaps the worst of them all is Nancy Pelosi. This 77-year-old elderly woman has been wreaking havoc on our country for many years. Her toxic, San Francisco politics, have divided the country, weakened our national security, and damaged our economy.

But there’s more. In recent years, we’ve seen her true colors emerge. She might be getting a bit too old to call the shots, given her many on camera gaffs. But much like her idol, Hillary Clinton, it appears Nancy holds to a public opinion and a private one.

While appearing before the cameras, she says what she thinks people want to hear. But privately, she holds to a different agenda.

One of her own allies, radical race baiter Keith Ellison, all but confirmed Pelosi’s true stance on a vital issue.

Despite what’s she said in public, she has other plans for America. Plans that would surely sink our country and plunge us into debt, poverty, and death.

Ellison asked if anybody was recording him before proceeding.

“Is anybody taping me right now? OK, so, you may have heard that Nancy [Pelosi] is not for it, but that’s not really true,” Ellison said. “Nancy has to represent a very diverse caucus. She does not like getting out ahead of the caucus too fast. So she’s trying to get, she’s, you know, you know, she actually likes the concept.”

“She’s trying to get, you know, you know, she actually likes the concept. She says it’s the best way to do it. She says it’s the cheapest way to do it, but she’s got to make sure that she brings our Blue Dog friends along,” Ellison added. “And by the way, for any of us progressives who get mad at the Blue Dogs, if we didn’t have them, some of them would be replaced by Republicans.”

Pelosi, like other establishment Democrats, has been reluctant to make single-payer a plank in the 2018 platform.

“At a briefing with reporters last month, the House minority leader, Representative Nancy Pelosi of California, replied with a flat ‘no’ when asked if Democrats should make single-payer a central theme in 2018,” The New York Times reported in June.

“The comfort level with the broader base of the American people is not there yet,” Pelosi said.

Sorry, Nancy, but that “comfort level” will never be there.

Democrats are so determined to turn the United States into a pauper state. They want us dependent on the government for everything, including heath care. Are the democrats so stupid as to ignore the massive failures of Obamacare?

Not only do they refuse to see how it’s failed, they want to create an even greater mess with single-payer healthcare! A concept that has failed in Europe and Canada. A concept that will ensure terrible health care coverage, massive taxes, and a burden generations will suffer under.

It would be like turning hospitals and doctor’s offices into DMV’s. Government-run anything is always a failure. Bureaucrats and politically appointed officials should have nothing to do with your personal health.

Not only that, but the cost to the tax payer would be immeasurable. The problem with socialism (and that’s what this is) is that you eventually run out of other people’s money. Our country would be plunged into debt. Businesses would collapse. Americans would lose countless jobs.

But at least illegal immigrants would get free health care.

This is the true plan of the democrats. Nancy Pelosi might say otherwise, but her buddy Keith has betrayed her.

It’s high time they lot of them were kicked to the curb.