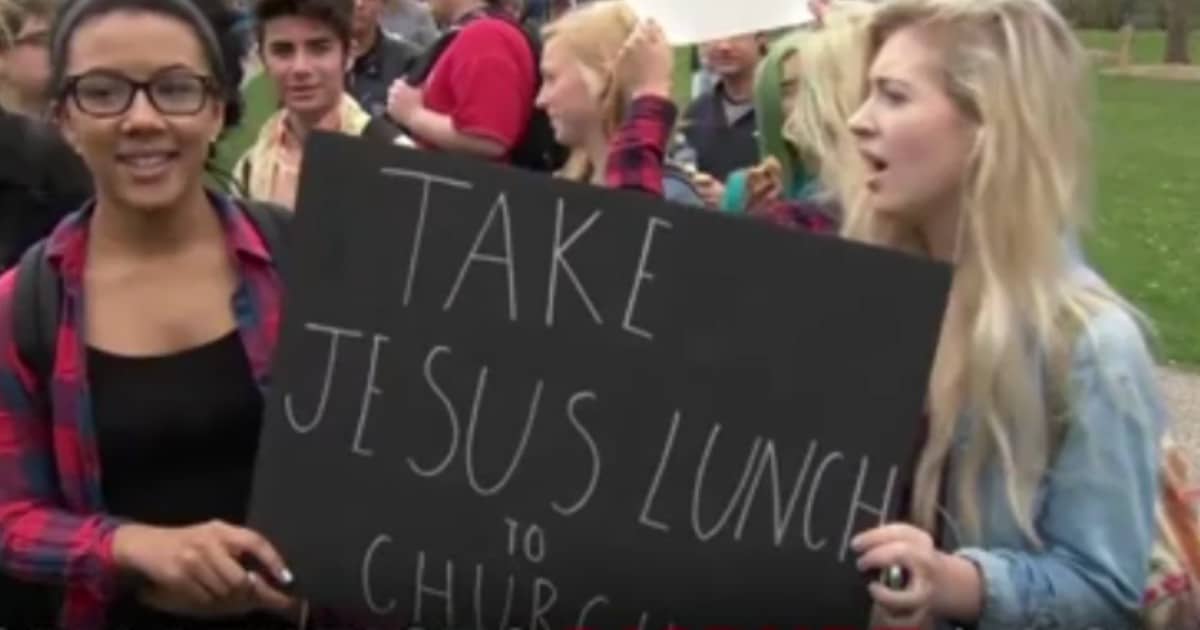 It’s a sad reality that forces within our country are working to destroy the Christian faith.

I’m not talking about radical, Islamic activists or terrorists, but everyday Americans. These atheists have been working to erase our Biblical faith not only from our history, but from our daily lives. For decades they have tried to destroy the very foundation of the United States.

This is never more real than in our public schools. The places that should be embracing such freedoms as the freedom of religion — granted to us by the First Amendment — are perhaps the most hostile environment for people of faith.

Students who believe in the Bible are faced with daily ridicule. They are often picked on or treated as outcasts for their convictions. Meanwhile the staff and faculty of schools look the other way, or worse defend the rights of the atheists and Muslims, while vilifying the Christians.

This was the case in a school in Wisconsin, where Christian students and moms gathered regularly for lunch. But when the atheists tried to destroy their faith, they found a way to overcome.

A group of Christian students showed a handful of atheists the best way to handle their protests, and you can bet it left them stinging.

The Freedom From Religion Foundation protesters were speaking out against an optional “Jesus Lunch,” where moms provide lunches and a few words from the Bible to students at Fireman’s Park near Middleton High School in Wisconsin.

The moms have been providing lunches for students every Tuesday since 2014, but only in 2016 had the group come under fire.

In April of 2016, protesters and those attending the lunch became involved in a screaming match that garnered much national attention.

The moms in charge of the lunch meetings decided that yelling contests served no one and decided the best way to handle protesters was to simply ignore them.

When the protesters arrived, that’s precisely what happened.

Melissa Helbach, one of the mothers who serves the lunches, said that while the moms were sharing a Christian message, protesters were chanting “Keep Jesus in the church.”

“The kids didn’t retaliate. Then some of the protesters walked through with signs, heckling the kids, but they didn’t respond — they just kept eating,” she told EAGNews.

What a remarkable contrast.

Imagine the scene in your mind. These atheists, who consider themselves to be smarter and more “evolved” than the Christians, were screaming, heckling, and waving around protest signs.

What were the Christian kids doing? Showing their maturity and tolerance by ignoring them and going about their lunch.

How can any atheist group expect the rest of our country to take them seriously when they behave in such a way?

Any legitimate goal they have is undermined when it becomes clear that all they want to do is destroy the First Amendment rights of their fellow Americans.

They’re not concerned with protecting “separation of Church and State” but to create a society were God is not allowed.

These atheists don’t care that Christians have every right to express their faith, be it at church or school.

Make no mistake, despite this victory, the atheists will be at it again to undermine the faith of millions of Americans.

But we can overcome if we hold true to what we believe, protect our Constitutional Rights, and take the high road.