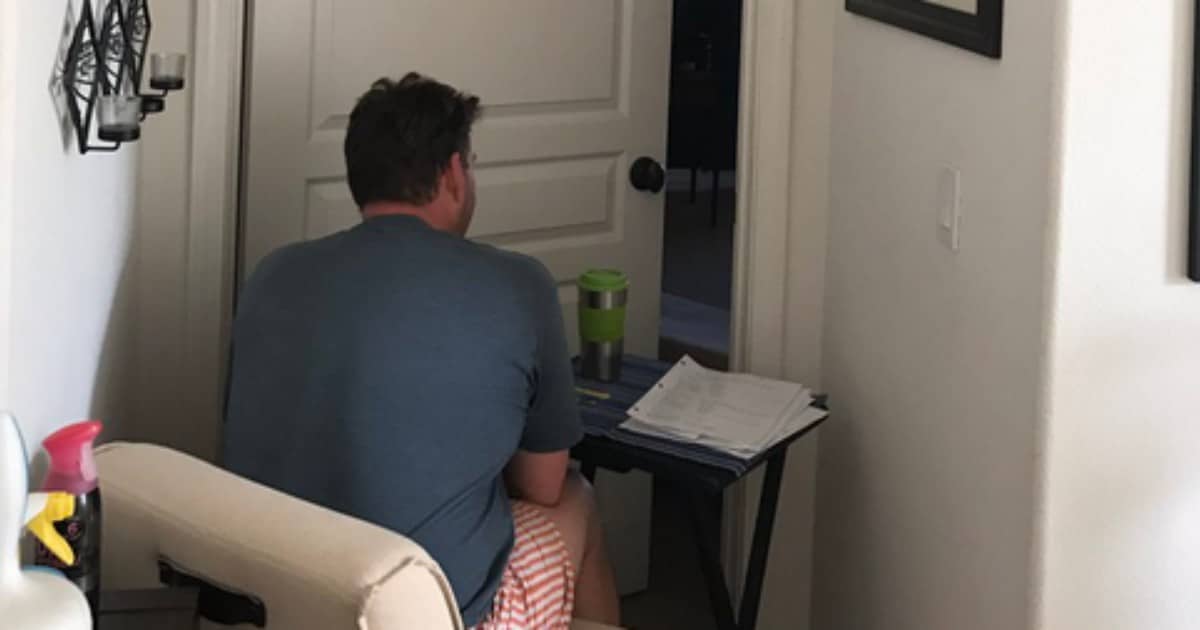 As a long-married man, I can assure you that nearly every time you’re banished from your bedroom, away from your wife, it doesn’t make for a touching story. Usually, in fact, it’s just a lesson in ‘things you shouldn’t say to your spouse.’

This story is different. Mind you, it looks the same – husband outside the door, and banished from the inside; wife on the inside, sleeping alone.

But in this case, the husband isn’t banished because she’s angry – it’s because she’s sick. And not just with a cold, she has cancer. Since she is receiving cancer radiation treatment she has to stay isolated.

So he sits outside. After all, she still needs someone to talk to.

My mom has to stay in her room in isolation for her cancer radiation so my dad set up a desk at her door to keep her company and I'm crying pic.twitter.com/rucH9HfDvk

A photo of a husband sitting outside of the bedroom where his wife has to remain alone for her cancer treatment has gone viral.

“My mom has to stay in her room in isolation for her cancer radiation so my dad set up a desk at her door to keep her company and I’m crying,” Mackenna wrote on Twitter.

Her Tweet has hundreds of responses in support and in total awe of the couple’s love for one another.

“I just thought it was sweet because they are so in love,” Mackenna said of the photo.

Mackenna’s mother Marci has thyroid cancer. Doctors caught it early, but not early enough to prevent it spreading into her lymph nodes and trachea. Luckily for Marci, surgery removed the cancer from those spots.

As for the thyroid, there’s two options – remove it, or undergo chemotherapy. And it’s best to do the chemotherapy – you really, really need your thyroid, if you can keep it.

So Marci sits alone, and her husband talks to her outside her room.

And Mackenna’s tweet quickly made her father one of the most popular figures on the internet. Swarms of reporters began asking for permission to use her photo.

@mackenna_newman Hey I'm a producer at @nowthisnews can I use this photo in a news video with all credit going to you?

@mackenna_newman Hi, did you take this photo? If so, may we use on all ABC News platforms and partners with credit to you?

At the moment, Marci’s cancer is in remission. The doctors will keep close tabs on her neck and lymph nodes, to make sure it doesn’t return.

And Mackenna’s dad? “Mackenna’s mom told Buzzfeed ‘Jon goes to every doctor’s appointment, every blood test, every surgery, every radiation. And, as you can see, if he can’t be by my side he is as close as he can get!’”

He’ll probably be nearby.