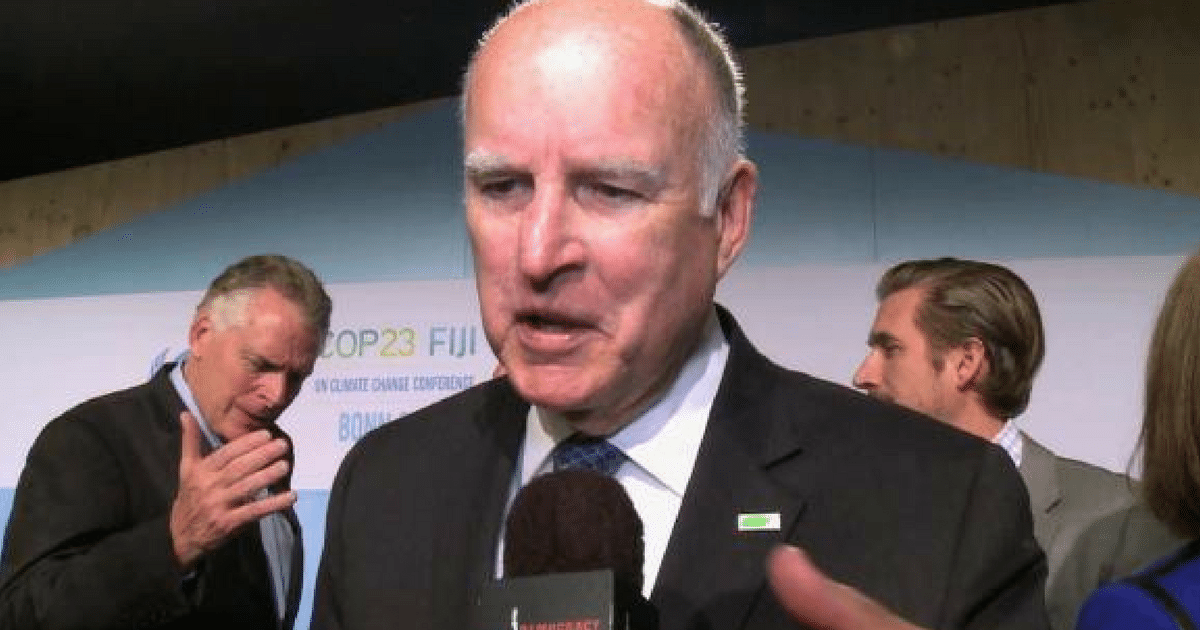 It’s not every day when a lib Democrat admits the cold hard truth. About anything.

When it does happen, however, it’s worth noting why – and it’s always the same reason. Sometimes, speaking the truth will keep you in office.

And when it comes to choosing between ideology or political power, you can bet a Democrat will choose political power. It is, after all, the sole reason for his existence. And it also explains why California Governor Jerry Brown just admitted a startling truth – California, his beloved liberal state, needs fossil fuels.

Which means, of course, that liberal Democrat Jerry Brown also needs fossil fuels if he wants to be re-elected. So guess who’s now on the side of fossil fuels?

Brown told reporters that cutting off the oil spigots could lead to severe economic destruction. His comments contrast with his belligerent position on fossil fuels.

“Well, if we stopped the 32 million cars [and] said you can’t use oil, the whole economy would collapse. You’d have a revolution. There’d be shooting in the streets — and you couldn’t do that, and no one would do that.”

Mind you, this is the same governor and state that tried to force people to buy inferior electric cars. It’s the same state that made endangered species a priority over human beings. California hates fossil fuels. To admit that it needs them is pretty humiliating.

And we should also read between the lines here – the fact that Jerry Brown had to make this kind of a statement at all suggests that lib groups were really pushing for California to ban cars.

And that’s just not something he can actually do. Especially not with Trump’s new tax bill on the horizon.

The tax bill would likely dash Brown’s hopes of keeping the anti-gas vehicle crusade on the straight and narrow. Reports show the bill could destroy the push.

Data shows that the elimination of the tax credit could be a death knell for the budding green energy industry.

Jerry didn’t want to make this statement – he had to. Otherwise the left would ban fossil fuels and push the state into bankruptcy.

And that, of course, means no more governing power for Jerry. And we all know which is more important.