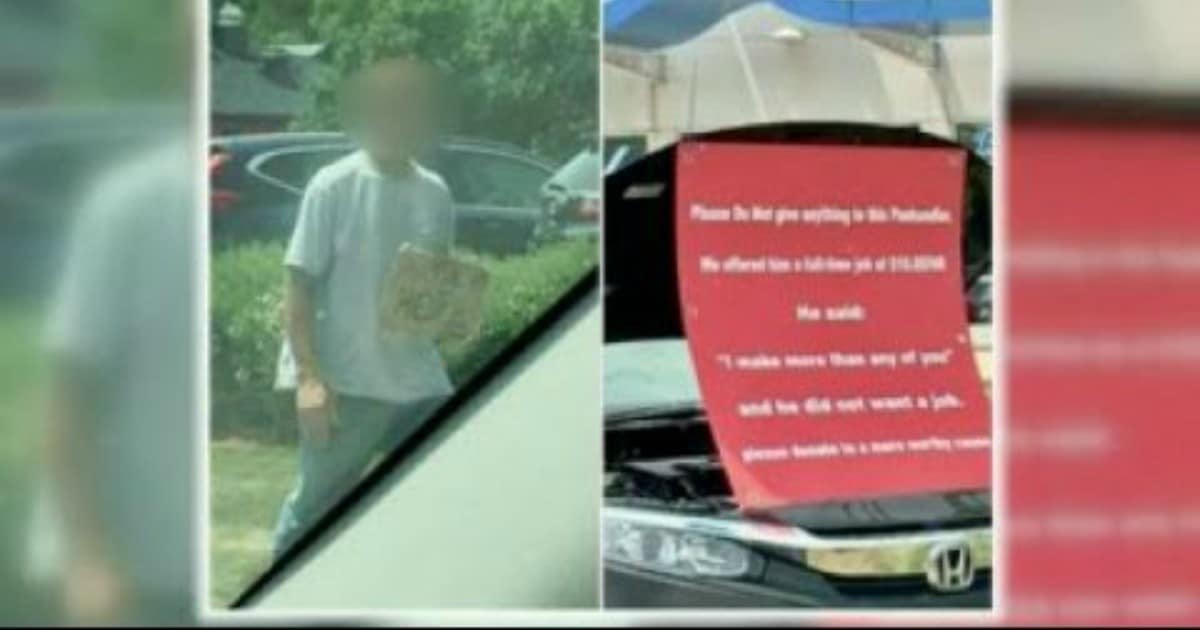 You see them all the time. In major cities, you can’t go far without seeing one.

Many hundreds of thousands of Americans spend their lives begging on the streets. It’s a heart-wrenching sight that compels many of us to give.

Yet what this one car dealership discovered will have you shocked. Many of those beggars aren’t are hard up as you think.

The panhandler had been standing near Brighton Honda asking passers-by for money on a regular basis when the dealership offered him a job making a respectable hourly wage, but he thumbed his nose at the offer, saying he could make more money panhandling, according to WJBK.

In an epic response, the dealership put up a large sign on the hood of a car in front of the business calling out the panhandler for refusing the job, asking those who may feel inclined to give money to him to instead give to a more “worthy cause.”

“Please do not give anything to this panhandler. We offered him a full time job at $10.00/HR,” the sign read. “He said: ‘I make more a day than any of you’ and he did not want a job. Please donate to a more worthy cause…” 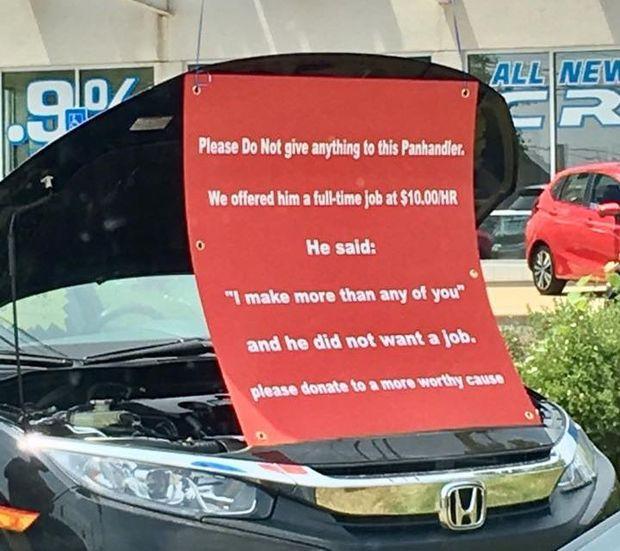 A photograph of the dealership’s sign was posted to Facebook where it had been shared more than 6,000 times as of Thursday afternoon. Soon after it was posted, the man was no longer begging in front of the dealership, as he had been arrested for being drunk and disorderly, WJBK reported.

Think this is an isolated incident? Think again. Most beggars in major cities make large sums a cash each day. Many of them aren’t even homeless.

They thrive by manipulating the sympathies of kind-hearted people like you and me. But when you give to a beggar on the street, you are only aiding their sick lifestyle. It’s like handing an alcoholic a beer.

By giving to a beggar, you’re telling them that their choice to sit on the street and ask for money is working. Instead, you must do the seemingly crueler choice, and ignore them. If enough people refuse to give them cash, then they will be forced to clean up their act and get a real job.

Many of these people have families that they are neglecting. They might even have kids and spouses they haven’t seen for years. It’s up to us not to enable their toxic pattern, and compel them to get on the straight and narrow.

Be sure to share this message and spread the word!