Very rarely do we see U.S. senators getting along like this.

Even among their own party, senators don’t often get along. That can be largely due to the states they represent. Senators from California have different issues and burdens than senators from Ohio, or Nebraska.

The economic, social, and political landscape of each state can motivate senators to support different causes. Plus when you factor in the vast differences between conservative leadership and liberal leadership, disagreements and arguments are more common than cooperation.

So whenever you see all 100 senators get on board with an issue, you know it’s significant. For these longtime rivals and career politicians to put aside their differences to sign their name to a document speaks loudly of the importance of that issue.

Such was the case when all 100 senators signed a letter sent to the United Nations.

And it was in defense of Israel.

All 100 U.S. senators signed a letter Thursday asking United Nations Secretary General António Guterres to ensure that Israel receives fair and equal treatment at the world body, which the lawmakers said has advanced an “anti-Israel agenda.”

The letter, written by Sens. Marco Rubio (R., Fla.) and Chris Coons (D., Del.) and signed by every member of the Senate, insisted that the U.N.’s treatment of the Jewish state is “unacceptable” and must be addressed…

“Through words and actions, we urge you to ensure that Israel is treated neither better nor worse than any other U.N. member in good standing,” the letter states. “We are deeply committed to international leadership and to advancing respect for human rights. But continued targeting of Israel by the U.N. Human Rights Council and other U.N. entities is unacceptable.” 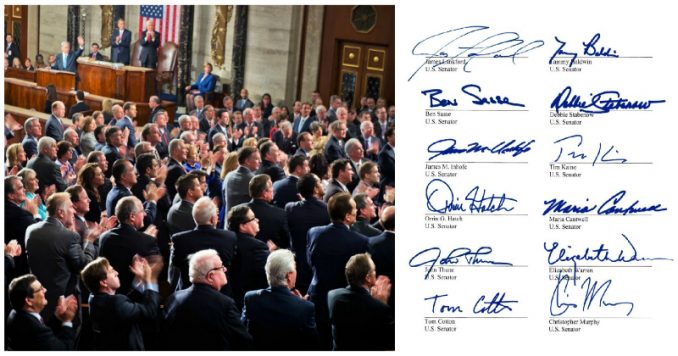 Recent events at the United Nation have shown that the organization is surprisingly hostile towards the nation of Israel. The U.N. has sided with enemies of Israel in recent decisions, decisions that were clearly manipulated by other Middle Eastern countries that want to see Israel destroyed.

Indeed, the U.N. does not have the best track record when it comes to the body’s decisions regarding human rights. Case in point: Saudi Arabia, which does not even allow women to drive cars, was elected to serve on the U.N. Commission on the Status of Women, a body “dedicated to the promotion of gender equality and the empowerment of women,” earlier this month.

Under President Obama, it seemed like the United States was equally hostile towards Israel, despite being a longtime ally.

Yet both republican and democratic leaders in Congress have expressed support for the country in the past. This letter will surely put pressure on the U.N. to treat Israel fairly and not to side with countries that simply want to antagonize them.

President Trump has made it clear that Israel will be supported by his administration. His close relationship with Israel’s’ Prime Minister is testament to that.

At least we can enjoy one issue where both political parties are in agreement.