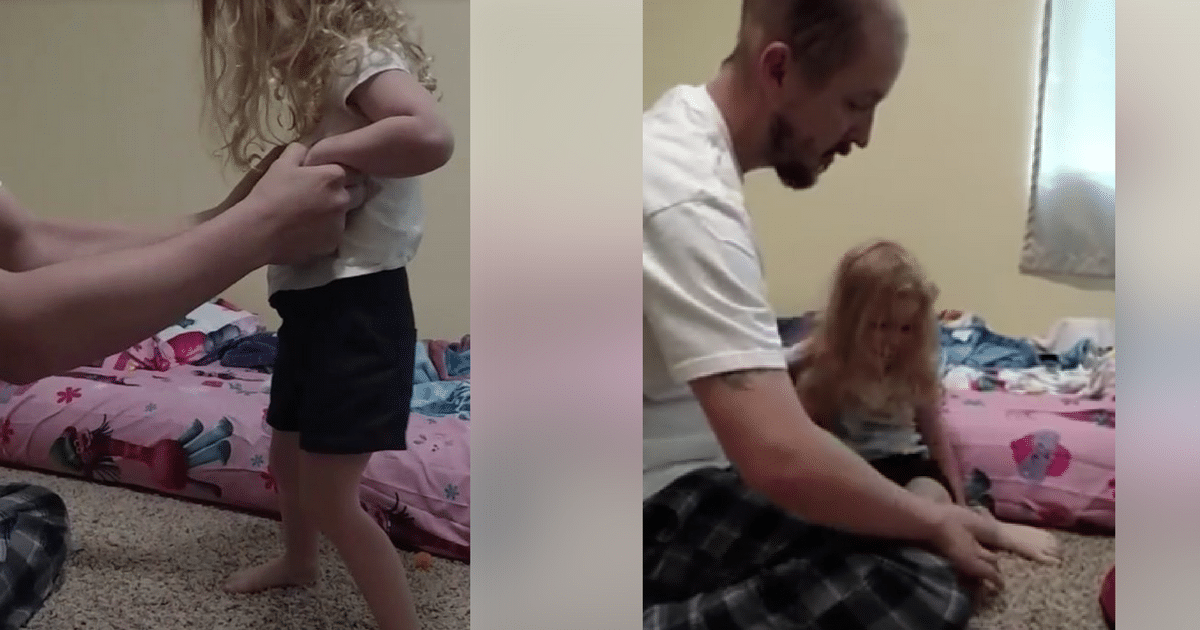 Here’s a story to help all those parents out there.

It always pays to be vigilant. This is especially true when it comes to the health of your children.

Even the smallest problem can result in major issues. An ounce of concern can mean the difference between life and death.

Such was the case when a mom noticed her daughter acting strangely and took her to the hospital. What he discovered to be the cause is shocking — and eye-opening.

We had a little bit of a scary morning today…luckily everything is ok but I wanted to share this so the rest of you are aware.Evelyn started acting a little weird last night around bed time. She didn't want to stand up after her bath to get into her pajamas. I helped her and got her in bed. She was a little fussy last night and I ended up sleeping in bed with her all night.This morning she was having a hard time standing. She could barely walk, or crawl, and could hardly use her arms. We took some video this morninh to send to family to see if they had any idea what could be going on. We decided to take her into the ER right after we took this video because her symptoms were getting worse, and given Lantz's history with cancer we were quite concerned.We got into a room quickly, thank God, and were seen almost right away. The doctor talked to us for a minute and said over the past 15 years he had seen about 7 or 8 children her age with identical symptoms and more than likely she had a tick. They looked her over, combed through her hair really well and sure enough found a tick hiding in her hair.This condition is called tick paralysis. It can affect dogs also and can be fatal. I'm glad we took her in when we did and that it wasn't something worse and that we found it before it got worse.The ticks are out like crazy right now in this area so if your children or dogs start acting a little off, check them thoroughly for ticks!I feel awful for not having seen the little bugger sooner but I never would have even thought to look for a tick. It's crazy that a little bug can do this!We're still in the ER. Now that the tick has been removed, Evelyn should start feeling like herself in a couple of hours. She's enjoying popsicles and watching cartoons ☺ They want to monitor her for a little longer then we can go homeCrazy morningUPDATE: I didn't realize how widespread this video would end up! So for those of you who don't know us personally, Evelyn is doing much better. It took her until the next morning to start acting like herself again. She is now pretty much completely back to her feisty little self. She complains a lot about her head itching but otherwise she's just fine.My husband and I are still in shock that this happened to our baby girl and I'm glad we were able to spread some awareness about this. It's not terribly common for this to happen but it's good to be aware that if your children or pets start having weakness in their limbs to look for a tick! The doctor told us that the type of tick that was found on her does not typically carry lyme disease (dog tick) but we are keeping a close eye on her anyway."Tick paralysis results from injection of a toxin from tick salivary glands during a blood meal. The toxin causes symptoms within 2–7 days, beginning with weakness in both legs that progresses to paralysis. The paralysis ascends to the trunk, arms, and head within hours and may lead to respiratory failure and death. The disease can present as acute ataxia without muscle weakness"For more information on Tick paralysis:https://en.wikipedia.org/wiki/Tick_paralysishttp://www.cvbd.org/en/tick-borne-diseases/tick-paralysis/human-tick-paralysis/I'm so thankful that we got her to the doctor quickly before her symptoms got worse and that the doctor in the ER that day had experience with this otherwise who knows how many tests they would have been doing on her trying to figure out what was wrong!Thank you all for your kind words and support through this crazy time! ♥UPDATE AGAIN:We're located in Eastern Oregon USA. Ticks though can be found all over. They're causing all kinds of problems on the east coast of America right now as well

Amanda Lewis recognized something “weird” was going on with her daughter, Evelyn, as soon as bath time was finished. The little girl didn’t want to stand up to put her pajamas on.

Not only did she not want to stand up on her own, a video Amanda took to document the scary experience showed her daughter suddenly could not stand up at all…

After sharing the video with family first in an effort to quickly identify the problem, Amanda rushed Evelyn to the hospital.

There, a doctor explained that in the past 15 years, he had seen seven to eight children who had exhibited signs “identical” to what Evelyn was showing. Evelyn more than likely had a tick bite.

Amanda said that a full body check revealed the parasite had been hiding in her daughter’s curly blonde tendrils.

It was a condition known as tick paralysis. Most often it affects livestock, that are more frequently the victims of tick bites. But when children under 10 are bitten by ticks, this often occurs.

The horrible cause? A neurotoxin delivered by an egg-laden female tick through its salivary glands. When it bites its victim, that toxin enters their body and causes paralysis.

The good news is the affects go away once the tick is removed. But it’s a scary situation. Always be sure to check for ticks after going outside in wooded, grassy areas.

Symptoms of the condition include: fatigue, numbness of the legs, and muscle pain. Serious complications can occur over time, so be sure to get medical attention right away.

Once again, being concerned for the welfare of your kids pays off.