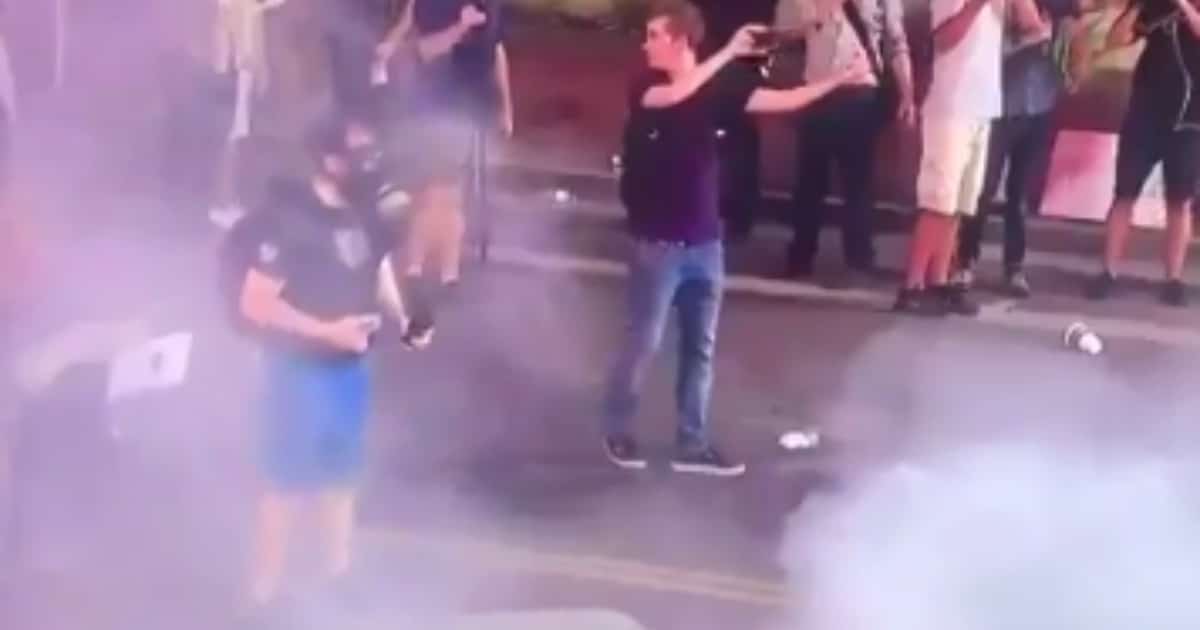 This past week saw President Trump speaking at a packed rally in Phoenix, Arizona.

While many patriots gathered inside to support the POTUS, plenty of nasty (most likely paid) protesters gathered outside to whine and complain.

I’m sure some of them wanted a repeat of Charlottesville. But unlike that disgraceful town, Phoenix cops refused to tolerate violence.

One Antifa goon learned that the hard way. The very hard way.

WATCH: I upgraded the video of the protester getting hit in the balls with a tear gas canister… with Celine Dion. #PhoenixRally pic.twitter.com/zVeHfUQz9C

By now, you are most likely aware that an anti-Trump protester was shot in the d*ck by police Tuesday night…

This was indeed the ball shot heard ’round the world. While the officer who made the shot remains anonymous, there are those who are seeking to discover what this hero’s identity is:

I want to buy the cop who shot that Antifa member in the balls with the tear gas canister a beer. #PhoenixRally #TrumpRally

One of those places is a tactical gear shop based out of Missouri called “Tactical Sh*t.” The shop describes itself as a store and website that sells “Tactical Gear & Shooting Supplies…”

“Tactical Sh*t” also posted this message to the police officer who shot Antifa Bro in the nut sack:

We can’t really think of anything more representative of the Year 2017 politically than a doughy white Antifa Bro in a gas mask getting shot in the d*ck by a police officer and that officer becoming a hero.

I’d like to buy that a cop a drink too.

I’m sure there are limp-wristed, hippie liberals who are outraged that a cop would do this. But keep in mind, this piece of work was intentionally attacking the police.

He was refusing to obey their orders to disperse—that’s enough to warrant a reaction from cops. Then he kicked a gas canister at the police. That’s a clear attempt to harm officers of the law.

They were in their right to arrest him and press charges. Their response was simply perfect.

If you ask me, far more Antifa numbskulls need to get shot in the cojones.