One of the great things about movies is this – the bad guy always knows who beat him, and why. And while reality doesn’t work that way, these British pilots found a way to get very close.

ISIS is bombed on a regular basis. And you can bet that the pilots delivering those bombs were more than happy to do their jobs after the cowardly Manchester bombing.

The only downside was that none of the perished ISIS jihadists would know that they died at the hands of Brits, avenging the graves of their perished countrymen.

But if you can’t tell ISIS why they’re being bombed beforehand, I suppose a message on a bomb is the next-best thing. ‘Love from Manchester.’ Gotta love the Brits. Short, and to the point.

RAF crew scrawled a message on a missile on its way to blast ISIS targets in Syria that read ‘Love from Manchester.’

The defiant note was initially believed to be a social media hoax but RAF bosses confirmed its veracity later today.

It is understood it was the brainchild of a drone squadron based at a secret location in the Middle East, in response to Monday night’s terror attack at Manchester Arena that claimed 22 innocent victims.

It was reported to be a Hellfire missile on social media, although it was later confirmed as a Paveway IV bomb.

The original tweet was deleted, for fairly obvious reasons – this was just the kind of tweet that would go viral within minutes. But this British pilot wasn’t looking for fame. He was simply standing with the victims of terror.

And the Royal Air Force? They’re with him. Said the RAF: ‘The sentiment of the message is understandable under the circumstances.

‘There’s a history of messages being written on missiles in the RAF.

‘It’s unlikely the individual responsible for it will be disciplined.’

It’s not just British soldiers, either. U.S. and Russian pilots have done the same. It’s safe to say that bombing ISIS is one of the few things the otherwise at-odds nations can agree on.

Following the terror attacks in Paris in November 2015 that left 130 dead, the message ‘From Paris, With Love’ daubed on American bombs and missiles bound for ISIS strongholds. 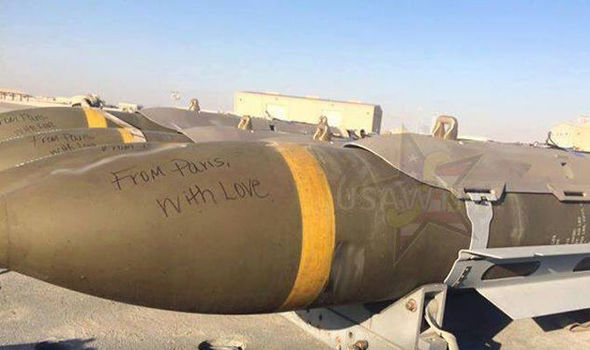 I’ll give ISIS at least this one thing: they really have a way of uniting otherwise quarreling countries.

Because, at this point, pretty much everyone wants them destroyed.